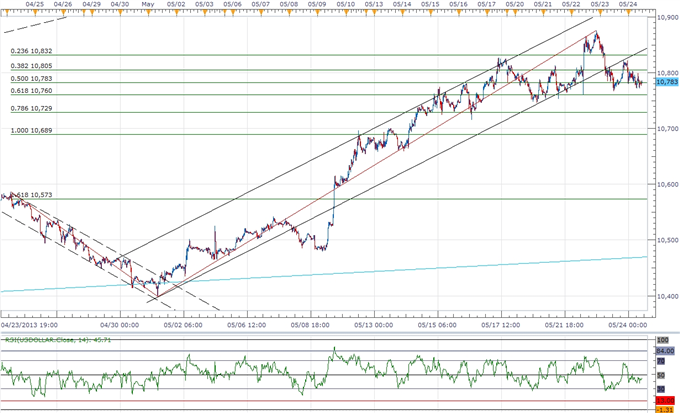 Even though the Dow Jones-FXCM U.S. Dollar Index (Ticker: USDollar) remains 0.01 percent lower from the open, we’re seeing the greenback continue to consolidate above the 10,760 figure, and the reserve currency may track higher ahead of the holiday trade as demands for U.S. Durable Goods increased 3.3 percent in April amid forecasts for a 1.5 percent print. Nevertheless, the dollar may face choppy price action throughout the North American trade as market participation thins ahead of Memorial Day, but should see the near-term correction in the reserve currency gather pace in the days ahead as it fails to maintain the bullish trend from earlier this month. Although, the shift in the Fed’s policy outlook should limit the downside for the dollar, and we will look for a higher low in the index as we anticipate the bullish sentiment surrounding the USD to get carried into the second-half of the year. 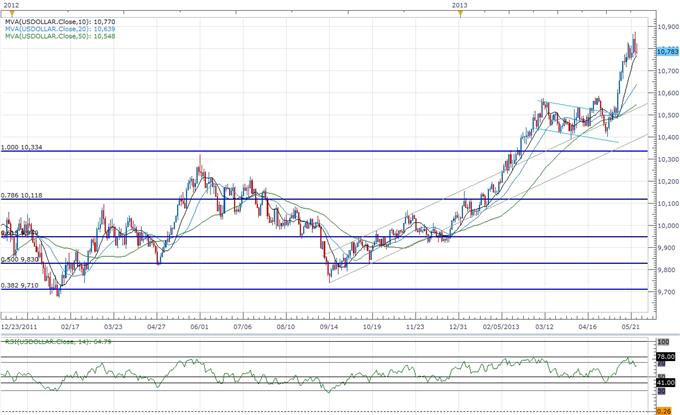 Indeed, the pullback in the relative strength index foreshadows a larger correction in the USDOLLAR, and we may see the 10,760 region fail to hold up as interim support as the oscillator continues to come off of overbought territory. Should we see a break to the downside, the dollar may work its way back towards former resistance around the 10,600 handle, and we will look to buy dips in the greenback as the exit strategy becomes a growing discussion at the Fed. In turn, the shift in the policy outlook should continue to influence the USD in the second-half of the year and we may see the FOMC move away from its easing cycle later this year as the outlook for growth improves.

Two of the four components rallied against the greenback, led by a 1.11 percent advance in the Japanese Yen, but we will look to buy dips in the USDJPY as it maintains the bullish trend from earlier this year. As we have a slew of Bank of Japan (BoJ) officials scheduled to speak next week, the fresh batch of central bank rhetoric may limit the downside for the USDJPY as Governor Haruhiko Kuroda retains a highly dovish tone for monetary policy. However, it seems as though the BoJ will stick to the sidelines for the time being as they assess the impact of the highly accommodative policy stance, and the dollar-yen may continue to consolidate within the upward trending channel from the beginning of the year as market participants weigh the outlook for monetary policy. Nevertheless, the deviation in the policy outlook should continue to produce fresh highs in the USDJPY, and we will look for a higher low in the exchange rate as we anticipate the BoJ to further embark on its easing cycle in the coming months.