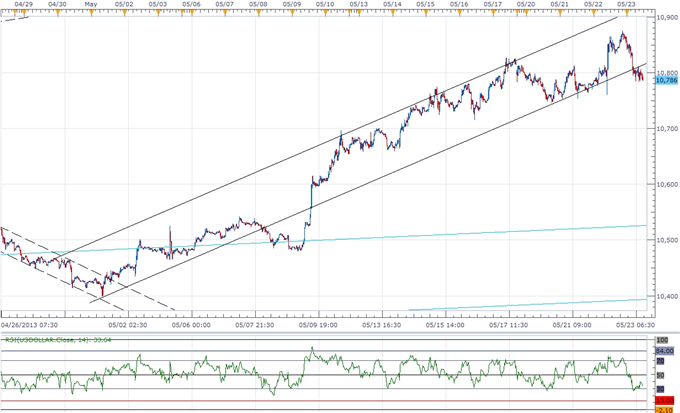 Although the Dow Jones-FXCM U.S. Dollar Index (Ticker: USDollar) remains 0.52 percent lower from the open, we’re seeing the 30-minute relative strength index come off of oversold territory, and the greenback may track higher during the North American trade as the drop in initial/continuing jobless claims paired with the 2.3 percent rise in New Home Sales instills an improved outlook for the world’s largest economy. In turn, we should see a small rebound going into the end of the week, but the pullback from 10,876 may turn into a more meaningful correction as former trendline support appears to be acting as new resistance. Nevertheless, the bullish sentiment surrounding the reserve currency should gather pace over the near to medium-term amid the ongoing improvement in the world’s largest economy. 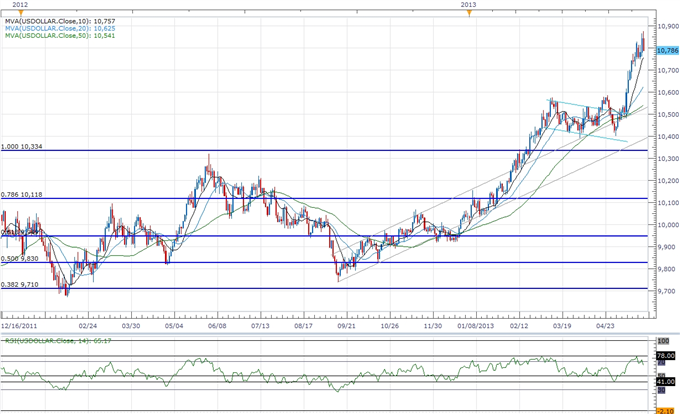 Despite the fresh 2013 high in the USDOLLAR, we’re seeing the relative strength index persistently come off of resistance (78), and the greenback remains poised for a larger correction as the oscillator falls back from overbought territory. However, the shift in the Fed’s policy outlook should limit the downside for the reserve currency, and we will be looking for a higher low in the index as we anticipate the bullish sentiment surrounding the dollar to get carried into the second-half of the year. Indeed, St. Louis Fed President James Bullard, who also serves on the FOMC this year, added to the discussion of scaling back on quantitative easing and said the committee is more like to taper its asset purchases than expand the non-standard measure, and argued that the central bank should become a too big of a player in Mortgage-Backed Securities (MBS) as he sees the economy expanding 3.0 percent this year.

The greenback weakened across the board, led by a 1.48 percent rally in the Japanese Yen, but the near-term correction in the USDJPY should produce a higher low in the exchange rate as the upward trend from earlier this year continues to take shape. Indeed, the pullback from 103.72 may gather pace in the days ahead as the Bank of Japan (BoJ) moves to the sidelines, but the deviation in the policy outlook should produce fresh highs in the dollar-yen as Governor Haruhiko Kuroda pledges to retain an aggressive approach in achieving the 2 percent target for inflation. In turn, the pullback in the USDJPY may offer a buying opportunity in June, and we should continue to see a series of higher highs and higher lows in the exchange rate as the BoJ remains poised to further embark on its easing cycle in the second-half of the year.