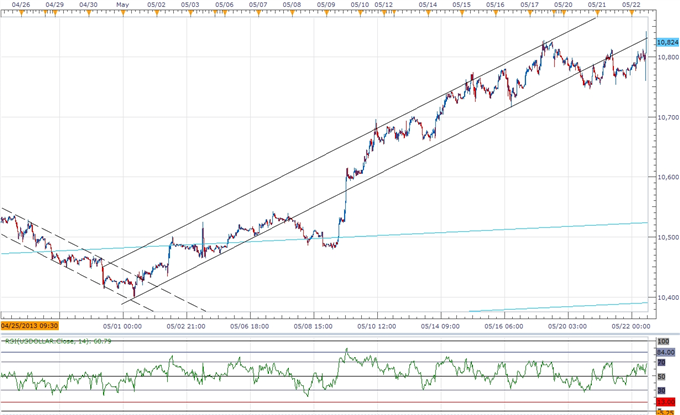 Although the Dow Jones-FXCM U.S. Dollar Index (Ticker: USDollar) is trading 0.24 percent higher from the open, we saw a dip in the reserve currency as Fed Chairman Ben Bernanke warned of tightening monetary policy prematurely. Indeed, the prepared remarks sounded fairly dovish as the central bank head pledges to preserve the highly accommodative policy stance as long as needed, but the market reaction was short-lived as Mr. Bernanke warned of keeping the benchmark interest rate too low for too long. Nevertheless, the greenback could be carving out a near-term top ahead of June it struggles to maintain the upward trend from earlier this month, but we anticipate a higher low in the USDOLLAR as a growing number of Fed officials scale back their willingness to expand the balance sheet further. 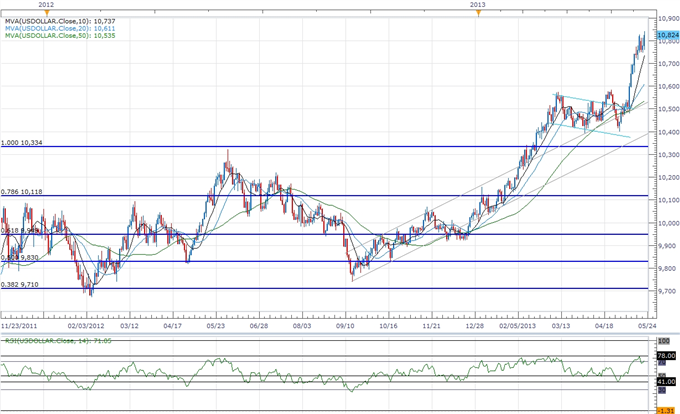 As the relative strength index continues to come off of resistance (78), the oscillator certainly points to a near-term correction in the USD, but the bullish sentiment surrounding the reserve currency may gather pace over the next 24-hours of trading should the FOMC Minutes further dampen speculation for additional monetary support. Indeed, the policy statement may reflect a greater discussion to taper the asset purchase program as the world’s largest economy gets on a more sustainable path, and the downside should be limited for the greenback amid the shift in the policy outlook. As we look for a higher low in the USDOLLAR, we may see former resistance around 10,600 act as support, and we will maintain a bullish outlook for the greenback as the recovery gradually gathers pace.

Three of the four components weakened against the greenback, led by a 0.91 percent decline in the Australian dollar, while the Japanese Yen shed 0.85 percent even as the Bank of Japan (BoJ) interest rate decision failed to shift the policy outlook. Nevertheless, we should see the USDJPY continue to push higher in the second-half of the year amid the deviation in the policy outlook, but we will keep a close eye on the relative strength index as it persistently flirts with overbought territory.