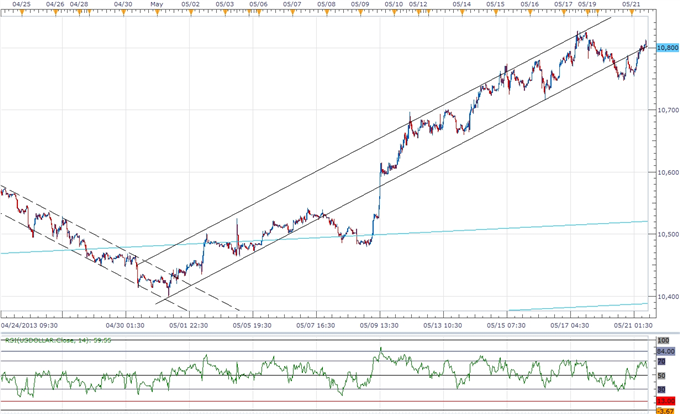 The Dow Jones-FXCM U.S. Dollar Index (Ticker: USDollar) is 0.37 percent higher from the open after moving 86 percent of its average true range, and the rebound may gather pace ahead of the FOMC Minutes as we see a growing discussion to taper the asset purchase program. Indeed, the shift in the policy outlook should continue to heighten the appeal of the greenback, and the bullish sentiment surrounding the reserve currency may gather pace in the second-half of the year as the Fed appears to be slowly moving away from its easing cycle. Although we’re seeing the USDOLLAR climb back into the upward trending channel from earlier this month, we’re seeing the 30-minute relative strength come up against overbought territory, and the reserve currency may face a small correction ahead of the major event risks on tap for tomorrow as market participants weigh the prospects for future policy. 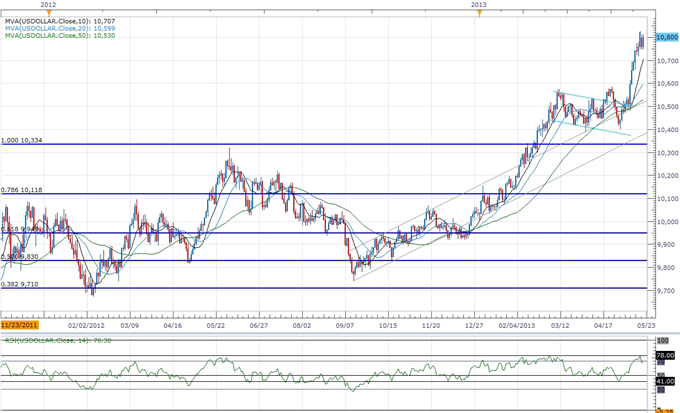 Beyond the FOMC Minutes, we also have Fed Chairman Ben Bernanke scheduled to testify in front of Congress tomorrow at 14:00 GMT, but the central bank head may refrain from saying anything new as the committee sticks to its highly accommodative policy stance. Nevertheless, Chairman Bernanke may sound more upbeat this time around as the economic recovery becomes more broad-based, and the fresh batch of central bank rhetoric may prop up the USD as the central bank adopts a more neutral to hawkish tone for monetary policy. Indeed, it was interesting to see that comments from Fed dove Charles Evans sparked a bullish reaction in the dollar as he struck an improved outlook for the U.S. economy, and we may see the USDOLLAR continue to mark fresh highs over the near to medium-term as the central bank drops its dovish tone for monetary policy.

The greenback rallied across the board, led by a 0.80 percent decline in the British Pound, while the Australian dollar slumped 0.45 percent amid the flight to safety. Although the relative strength index on the AUDUSD is bouncing back from a low of 19, the Reserve Bank of Australia (RBA) Minutes continued to strike a dovish tone for monetary policy as the central bank sees the economy operating below trend, and Governor Glenn Stevens may continue to carry out the easing cycle in the second-half of the year to encourage a stronger recovery. According to Credit Suisse overnight index swaps, market participants still see another 25bp rate cut in the next 12-months, and we will continue to sell rallies in the AUDUSD as it maintains the downward trend dating back to 2011. Nevertheless, as the relative strength index bounces back from a low of 19, we may see a more meaningful correction in the days ahead, but the bearish sentiment surrounding the higher-yielding currency may pick up in the second-half of 2013 as the fundamental outlook for the region remains weak.