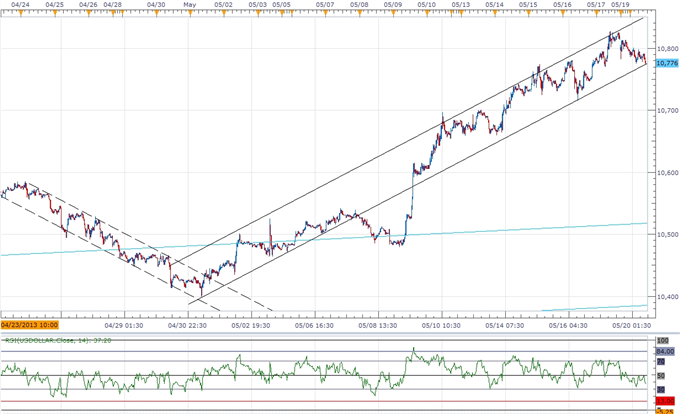 Although the Dow Jones-FXCM U.S. Dollar Index (Ticker: USDollar) is trading 0.42 percent lower from the open, the greenback appears to be finding trendline support, and the reserve currency may track higher ahead of the FOMC Minutes on tap for later this week as a growing number of central bank officials scale back their willingness to expand the balance sheet further. As the 30-minute relative strength index bounces back from oversold territory, we should see the dollar consolidate throughout the North American trade, and we will continue to buy dips in the greenback as the upward trend from earlier this month continues to take shape. In turn, the bullish sentiment surrounding the greenback should gather pace over the near to medium-term, and the fresh batch of central bank rhetoric may spark fresh 2013 highs in the USDOLLAR as market participants scale back bets for more Fed easing. 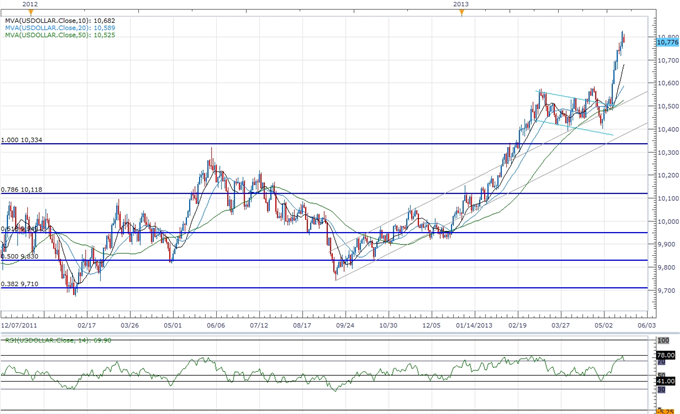 Dallas Fed President Richard Fisher argued that the FOMC should have scaled back its asset purchase program at the previous meeting as he sees the world’s largest economy expanding more than 2.5 percent this year, and talked down the threat for deflation as the recovery gradually gathers pace. As a result, the meeting minutes may reveal a greater discussion to drop the highly accommodative policy stance, and we may see a growing number of Fed officials start to float a tentative exit strategy in the coming months as the U.S. gets on a more sustainable path. Indeed, we will need to keep a close eye on the relative strength index as it falls back from resistance (78), but we may see another push to the upside as long until the oscillator falls back below 70.

The greenback weakened across the board, led by a 0.69 percent advance in the Japanese Yen, and the Bank of Japan (BoJ) interest rate decision on tap for May 22 may further dampen the appeal of the low-yielding currency as the central bank adopts a more aggressive approach in achieving the 2 percent target for inflation. In light of all of the measures taken by BoJ Governor Haruhiko Kuroda, the central bank may now look to incorporate a broader range of assets for its quantitative easing program, which could include Real Estate Investment Trusts (REIT), and we should see the board continue to carry out its easing cycle throughout 2013 in order stem the downside risk for growth and inflation. In turn, we will continue to buy dips in the USDJPY, and the pair looks poised to mark fresh highs throughout the year amid the shift in the policy outlook.