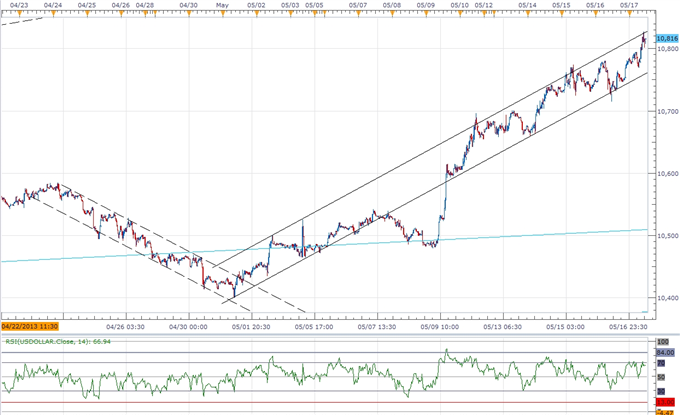 USD to Consolidate Ahead of FOMC Minutes- AUD Heavily Oversold

The Dow Jones-FXCM U.S. Dollar Index (Ticker: USDollar) is 0.57 percent higher from the open after moving 126 percent of its average true range, and the bullish sentiment surrounding the greenback may gather pace ahead of the FOMC Meeting Minutes on tap for the following week as the upward trending channel from earlier this month continues to take shape. As the Fed turns increasingly upbeat towards the U.S. economy, the policy statement may further dampen expectations for more quantitative easing, and we may see a growing number of central bank officials adopt a more neutral to hawkish tone for monetary policy as the region gets on a more sustainable path. However, as the index comes up against trendline resistance, with the 30-minute relative strength index falling back from overbought territory, we may see the dollar consolidate throughout the North American trade as market participation thins ahead of the weekend. 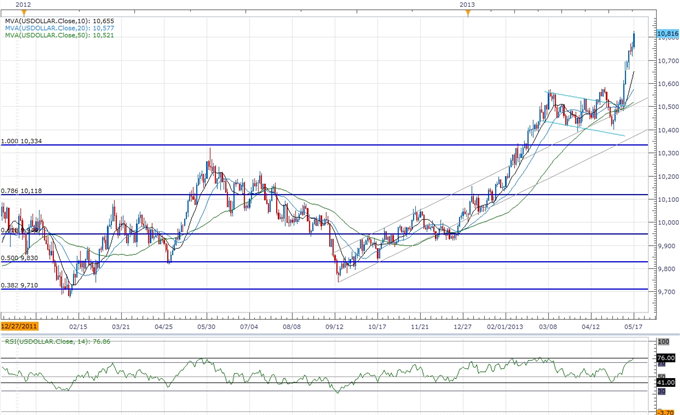 Indeed, San Francisco Fed President John Williams said the FOMC may scale back on QE ‘as early as this summer’ as the economic recovery gradually gathers pace, and went onto say that central bank may halt its asset-purchase program towards the end of the year ‘if all goes as hoped.’ As we see a greater discussion in moving away from the easing cycle, the shift in the policy outlook should continue to produce fresh highs in the USDOLLAR, but the index looks poised for a near-term correction as the relative strength index comes up against resistance (76). In turn, we should see the greenback carve out a higher low in the days ahead, and we may see a move back towards the 10,600 region as the index searches for support.

The greenback rallied across the board, led by a 0.79 decline in the Australian dollar, and the higher-yielding currency may face additional headwinds in the week ahead should the Reserve Bank of Australia (RBA) meeting minutes spur speculation for another rate cut. However, the central bank may strike a more neutral tone for monetary policy after pushing the benchmark interest rate to a fresh record-low of 2.75 percent earlier this month, and we may see Governor Glenn Stevens endorse a wait-and-see approach for the coming months as the rate cuts continue to work their way through the real economy. As the relative strength index on the AUDUSD trades at the lowest level since 2010, we may see a near-term correction take shape in the days ahead, but we will maintain a bearish outlook for the pair as we anticipate the RBA to reduce borrowing costs further in the second-half of the year.