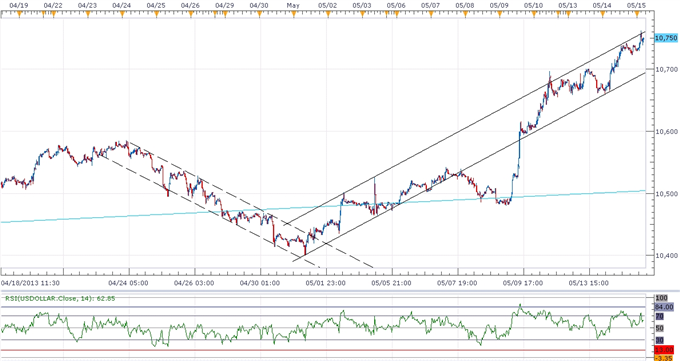 The Dow Jones-FXCM U.S. Dollar Index (Ticker: USDollar) is trading 0.05 percent higher from the open after moving 67 percent of its average true range, and the reserve currency may appreciate further throughout the day as dismal data coming out of the euro-area drags on market sentiment. However, as the 30-minute relative strength index falls back from overbought territory, the greenback may consolidate ahead of the North American trade, and the fundamental developments coming out of the world’s largest economy may dampen the appeal of the USD as we’re expecting to see a further slowdown in U.S. Producer Prices, while Industrial Production is anticipated to contract 0.2% in April. Should the data disappoint, the dollar may struggle to maintain the upward trending channel from the beginning of this month, and we may see a move back towards the 10,655 region as it searches for support. 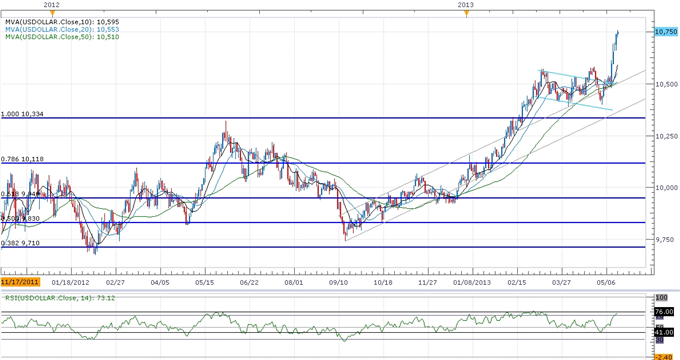 At the same time, the USDOLLAR looks poised for a more meaningful correction as the daily relative strength index approaches resistance (76), but we will look for a higher low in the index as the bullish sentiment surrounding the reserve currency gathers pace. As a growing number of Fed officials become increasingly skeptical of the FOMC’s highly accommodative policy stance, we may see the committee may lead more towards scaling back its asset purchase program at the June 19 meeting, and the central bank may shift gears in the second-half of the year as the region gets on a more sustainable path. In turn, we will maintain a bullish outlook for reserve currency, and will look to buy dips in the greenback amid the shift in the policy outlook.

Three of the four components struggled to hold their ground against the greenback, driven by a 0.19 percent decline in the Australian dollar, while the Japanese Yen was little changed even as Bank of Japan Governor Haruhiko Kuroda reiterated that the central bank will continue to aim for price stability. Indeed, former Ministry of Finance official Eisuke Sakakibara argued that the USDJPY at 110.00 would be ‘too weak’ for the region, and sees a reversal following a test of the 105.00 region as the BoJ takes a more aggressive approach in achieving the 2 percent target for inflation. However, as the USDJPY gets over bought, the 1Q GDP report may serve as the fundamental catalyst to spark a near-term correction in the exchange rate, and we may see the USD fall back towards the 100.00 figure should the growth rate top market expectations for a 0.7% rise.