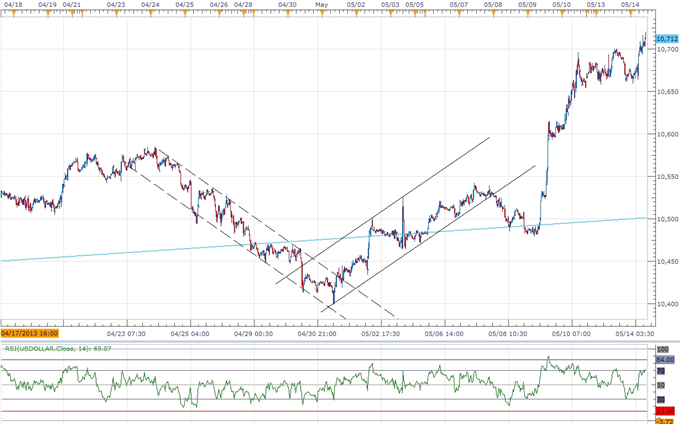 The Dow Jones-FXCM U.S. Dollar Index (Ticker: USDollar) is trading 0.19 percent higher from the open after moving 105 percent of its average true range, and the bullish sentiment surrounding the reserve currency may gather pace over the near to medium-term as a greater number of Fed officials see a growing argument to scale back on quantitative easing. Indeed, the shift in the policy outlook should prop up the dollar throughout 2013, but we may see a small correction over the next 24-hours of trading as the 30-minute relative strength index comes up against overbought territory. Nevertheless, as the USDOLLAR consolidates above the 10,650 figure, the index may carve out a higher base ahead of the next FOMC interest rate decision on June 19, and the greenback may continue to mark fresh highs in the coming months as the central bank looks to move away from its easing cycle. 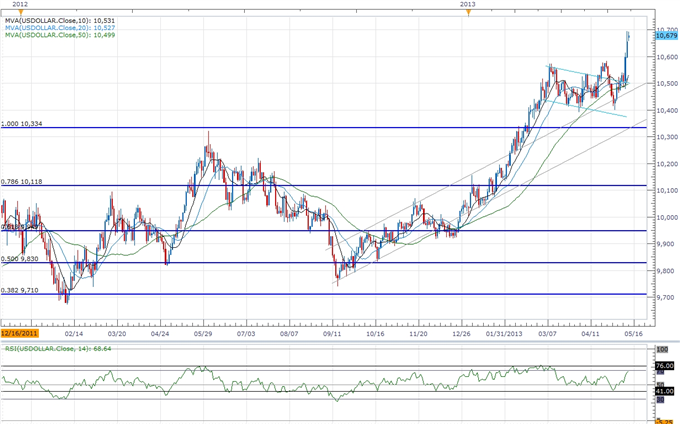 Indeed,Philadelphia Fed President Charles Plosser argued that the ‘extraordinary level of monetary accommodation will have to be scaled back, perhaps more aggressively than some think, to ensure that inflation over the medium term remains consistent with our target,’ and went onto say that the highly accommodative policy stance ‘would undermine the credibility of the Committee's statement that the pace of purchases will respond to economic conditions’ as the U.S. economy gets on a more sustainable path. In turn, we may see the FOMC nail out a more detailed exit strategy in the second-half of the year, and the central bank remains poised to gradually move away from its easing cycle as the outlook for growth improves. As a result, we will preserve a bullish outlook for the USD, but we will need to keep a close eye on the relative strength index as it pushes into overbought territory.

Three of the four components weakened against the greenback, led by a 0.37 percent decline in the Australian dollar, and the downward trend in the AUDUSD may continue to take shape in 2013 as the Reserve Bank of Australia (RBA) remains poised to carry its easing cycle into the second-half of the year. As the Australian government looks for more time in achieving a budget surplus, the RBA may come under increased pressure to further support the $1T economy, and Governor Glenn Stevens may push the benchmark interest rate to a fresh record-low in the coming months in an effort to encourage a stronger recovery. As the AUDUSD searches for support, we may see the pair come up against the 23.6 percent Fibonacci retracement from the 2011 high to low around 0.9780-90, but the higher-yielding currency may ultimately give back the rebound from 2012 (0.9580) as interest rate expectations remain tilted to the downside.