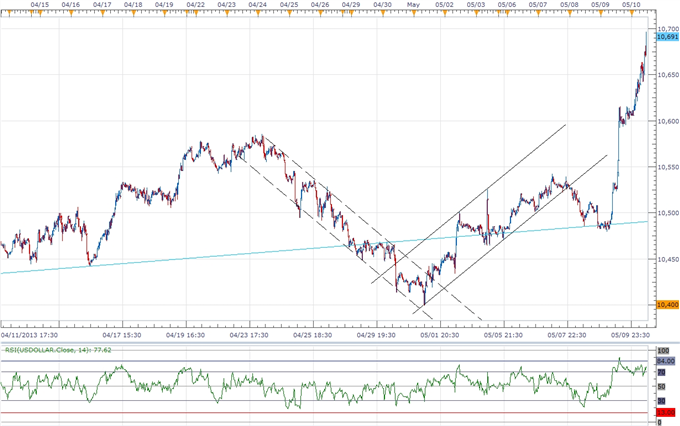 USD Bull Flag in Play- Will the G-7 Halt the JPY Decline?

The Dow Jones-FXCM U.S. Dollar Index (Ticker: USDollar) is 0.89 percent higher from the open after moving a whopping 165 percent of its average true range, and the bullish sentiment surrounding the reserve currency may get carried into the following week should the G-7 meeting in the U.K. fail to shore up investor confidence. Although we remain bullish against the USD, the greenback looks poised for a correction as the 30-minute relative strength index falls back from a high of 89, and we may see former resistance around the 10,600 provide support as the it continues to carve a series of higher highs paired with higher lows. However, as the economic docket for the following week is projected to show U.S. Retail Sales contracting another 0.3% in April, with the headline reading for inflation easing to an annualized 1.3% from 1.5% in March, a slew of dismal developments may dampen the appeal of the reserve currency, and we will keep a close eye on the news wire as we have a flew of Fed officials scheduled to speak in the days ahead. 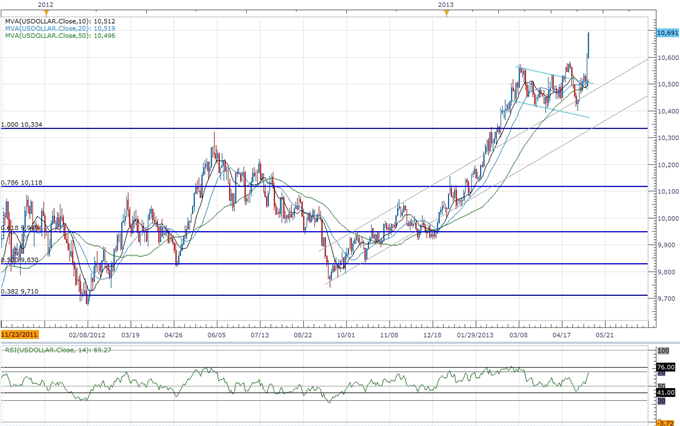 Beyond the G-7 meeting, we have Philadelphia Fed President Charles Plosser, Boston Fed President Eric Rosengren, Dallas Fed President Richard Fisher, Fed Governor Sarah Bloom Raskin, San Fran Fed President John Williams, and Minneapolis Fed President Narayana Kocherlakota scheduled to speak next week, and we may see a growing number of central bank officials adopt a more neutral to hawkish tone for monetary policy as the U.S. economy gets on a more sustainable path. Indeed, we may see greater arguments to scale back on quantitative easing as the recovery gradually gathers pace, and the FOMC may switch gears later this year as the ongoing expansion in the Fed’s balance sheet complicates the Fed’s exit strategy. As the bullish flat pattern finally plays out, we should see the dollar continue to make fresh highs over the near to medium-term, but we will keep a close eye on the relative strength index as it comes up against overbought territory.

The greenback rallied across the board, led by a 1.31 percent decline in the Japanese Yen, and the low-yielding currency may continue to lose ground ahead of the next Bank of Japan (BoJ) interest rate decision on May 22 as Governor Haruhiko Kuroda adopts a more aggressive approach in achieving the 2 percent target for inflation. Although we were waiting for the BoJ to see a move above 100.00, the USDJPY appears to be getting overbought as the pair rallies to a fresh yearly high of 101.97, and the G-7 meeting may limit the dollar-yen’s advance as U.S. Treasury Secretary Jacob Lew argues that the Japanese government must not target the exchange rate to foster domestic growth. Indeed, the central bank may face increased criticism from the global community given the marked deprecation in the local currency, and the outcome of the G-7 meeting may trigger a sharp correction in the USDJPY should the group speak out against the BoJ’s quantitative and qualitative approach for monetary policy. Nevertheless, we will continue to buy dips in the USDJPY on a longer-term scale, but the dollar-yen may enter a phase of consolidation in the coming days as market participants weigh the prospects for future policy.