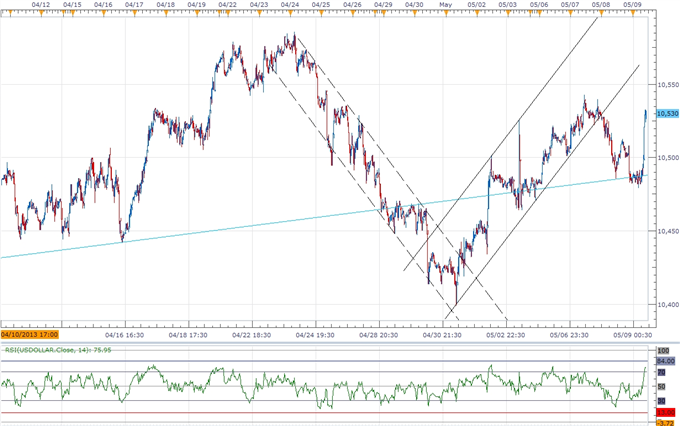 The Dow Jones-FXCM U.S. Dollar Index (Ticker: USDollar) is trading 0.18 percent higher from the open after moving 104 percent of its average true range, and the bullish sentiment surrounding the reserve currency may gather pace as the drop in Initial Jobless Claims instills an improved outlook for the U.S. economy. As the recovery becomes more broad-based, the inverse head-and-shoulders pattern may continue to play out in the days ahead, but the dollar may face a small pullback over the next 24-hours of trading as the 30-minute relative strength index pushes into overbought territory. In turn, we may have an opportunity to buy dips in the greenback, and we will maintain a bullish forecast for the USDOLLAR as it continues to build a short-term base in May. 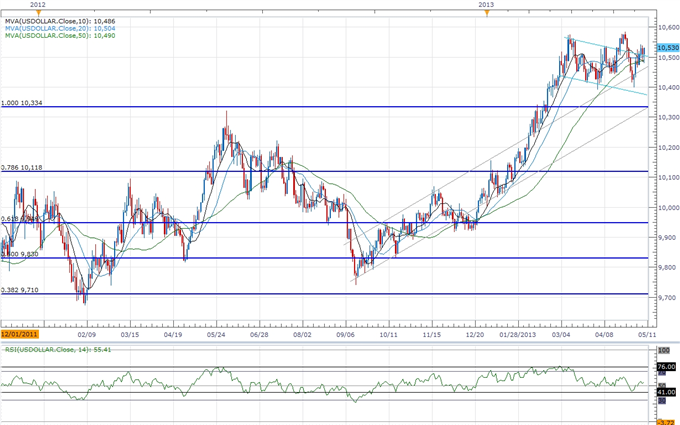 Although Chicago Fed President Charles Evans – who serves on the FOMC this year – argued that the central bank should push its highly accommodative policy stance ‘as hard as we can,’ the central bank dove sounded rather upbeat on the economy amid the better-than-expected recovery in the labor market. At the same time, Philadelphia Fed President Charles Plosser warned that the risks surrounding the Fed’s non-standard measures ‘are high’ as the costs outweigh the benefits, and went onto say that the committee should ‘gradually ease’ its asset purchase program as it complicates the exit strategy. As the U.S. economy gets on a more sustainable path, we should see a growing number of Fed officials scale back their willingness to expand the balance sheet further, and we should see the index push to fresh highs amid the shift in the policy outlook.

Three of the four componenets weakened against the greenback, led by a 0.43 percent decline in the Euro, while the Japanese Yen shed 0.32 percent, with the USDJPY working its way back above the 99.00 region. However, we may see another failed run at 100.00 as the pair remains stuck within a wedge/triangle formation, and the dollar-yen may continue to consolidate ahead of the next Bank of Japan (BoJ) interest rate decision on May 22 as market participants weigh the outlook for monetary policy. As Governor Haruhiko Kuroda expands the bond-purchasing program to JPY 7T and pledges to achieve a 1.9 percent rate of inflation by 2015, the central bank head may now look to include a broader range of assets, which could include Real Estate Investment Trusts (REIT), but the we may see a more meaningful correction in the USDJPY should the BoJ merely retain its current policy later this month. Unless we get further indication for a more aggressive approach, we should see the 100.00 figure continue to provide resistance, and we may see a near-term rally in the Japanese Yen as market participants scale back bets for additional monetary support.