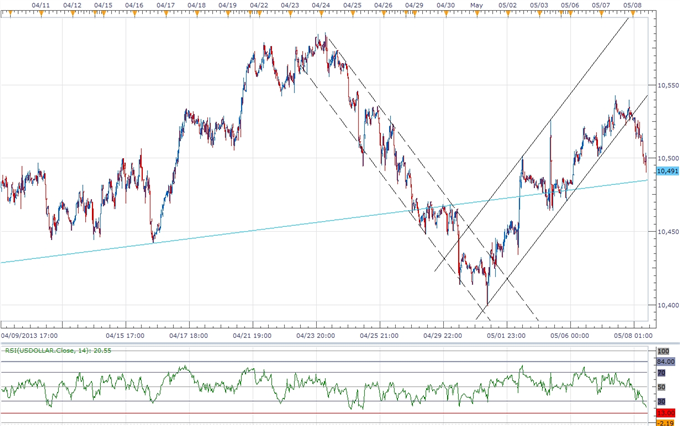 Although the Dow Jones-FXCM U.S. Dollar Index (Ticker: USDollar) remains 0.31 percent lower from the open, we should see a short-term rebound over the next 24-hours of trading as the 30-minute relative strength index pushes into oversold territory. However, as the dollar fails to maintain the upward trending channel from earlier this month, we may see a move back towards the 10,450 region, and the dollar may continue to consolidate over the remainder of the week as European policy makers pledge to take further steps in restoring investor confidence. Nevertheless, as the economic docket is expected to show wholesale activity in the world’s largest economy picking up during the month of March, a slew of positive developments could increase the appeal of the USD, and the reserve currency may regain its footing going into the following week should the data curb expectations for additional Fed support. 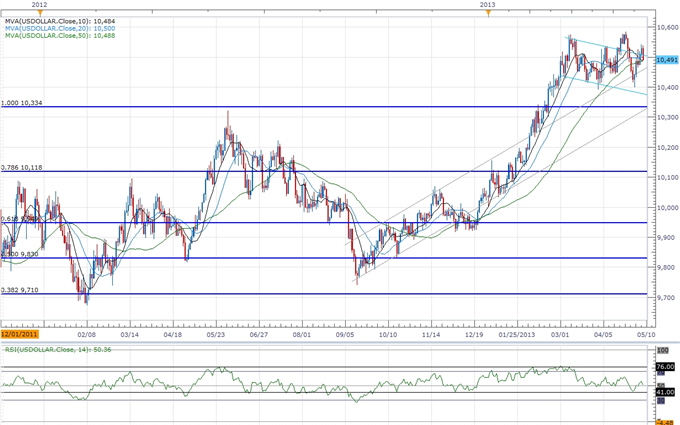 As the FOMC takes note of the ongoing improvements in the world’s largest economy, it seems as though the FOMC will retain its asset purchase program at $85/month, but it sees as though there’s a greater discussion to scale back on quantitative easing as the recovery gradually gathers pace. Indeed, we may see a growing number of Fed officials move away from the highly accommodative policy stance and look to remove the emergency measures as the U.S. gets on a more sustainable path, and we may see the index continue to build a short-term base in May as the relative strength index continues to hold above support (41). In turn, it seems as though we will need a fundamental catalyst to spur a more meaningful run at the 10,600 figure, and we will maintain a bullish forecast for the greenback as the FOMC remains poised to switch gears later this year.

The greenback weakened across the board, led by a 0.76 percent advance in the Euro, while the British Pound gained 0.56 percent ahead of the Bank of England (BoE) interest rate decision as the central bank is widely expected to uphold its current policy in May. Although the BoE Minutes are expected to show another 6-3 split within the Monetary Policy Committee, the quarterly inflation report may increase the appeal of the sterling should the central bank strike an improved outlook for the U.K., and the central bank looks primed to keep the Asset Purchase Program capped at GBP 375B indefinitely as it extends the Funding for Lending Scheme for another 12 months. In turn, the rebound from March (1.4830) may gather pace over the near-term as market participants scale back bets for more quantitative easing.