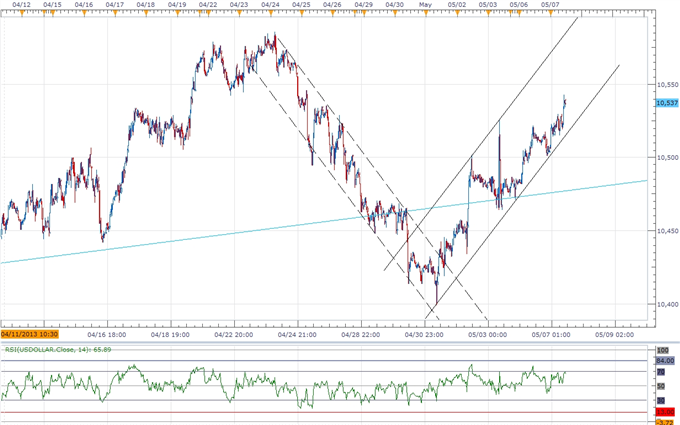 The Dow Jones-FXCM U.S. Dollar Index (Ticker: USDollar) is 0.25 percent higher from the open after moving 82 percent of its average true range, and the V-shaped rebound may continue to take shape as the economic docket is expected to show U.S. Consumer Credit increasing another $15.6B in March. As the fundamental developments coming out of the world’s largest economy encourages an improved outlook for growth, the upward trend in the index should continue to pan out in the days ahead, and the greenback may make another run at the 10,600 figure should the data dampen speculation for more Fed support. However, as the 30-minute relative strength index comes up against overbought territory, we may see a small pullback over the next 24-hours of trading, and we will look to buy dips in the reserve currency as the bullish sentiment gathers pace. 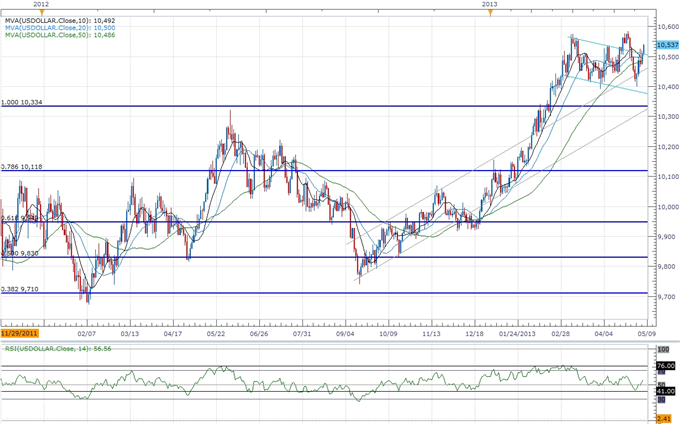 In light of the ongoing improvements in the world’s largest economy, Richmond Fed President Jeffrey Lacker argued that ‘the benefit-cost trade-off associated with further monetary stimulus does not look promising,’ and went onto say that ‘further increases in the size of our balance sheet raise the risks associated with the ‘exit process’ when it’s time to withdraw stimulus.’ As the U.S. gets on a more sustainable path, we may see a growing number of Fed officials speak out against the highly accommodative policy stance, and the FOMC may start to discuss a tentative exit strategy in the second-half of the year as growth prospects improve. As we’re still watching the bullish flag pattern take shape, with the 10,400 figure holding up as support, we may see a more meaningful run at 10,600, and the dollar remains poised to mark fresh highs over the near to medium-term amid the shift in the policy outlook.

Two of the four components weakened against the greenback, led by a 0.88 percent decline in the Australian dollar, and the AUDUSD remains poised to weaken further as the Reserve Bank of Australia (RBA) continues to embark on its easing cycle. Although the RBA pushed the benchmark interest rate to a fresh record-low of 2.75 percent, Governor Glenn Stevens remains poised to reduce borrowing costs further as the $1T economy remains ‘a bit below trend,’ and the Australian dollar should continue to give back the rebound from 2012 (0.9580) as interest rate expectations remain tilted to the downside. As the downward trend in the AUDUSD continues to take shape, we will look to sell rallies in the exchange rate, and the aussie may persistently underperform against its major counterparts as the RBA retains a dovish tone for monetary policy.