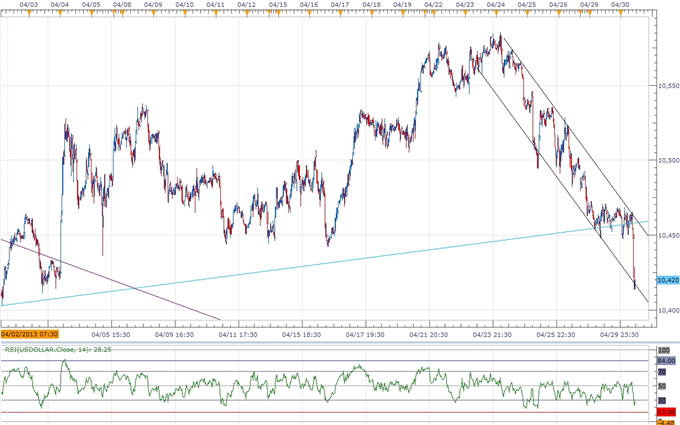 USDOLLAR Looks Higher Ahead of FOMC- Fed Rhetoric in Focus

The Dow Jones-FXCM U.S. Dollar Index (Ticker: USDollar) is trading 0.07 percent lower from the open even after the Conference Board’s Consumer Confidence survey advance to 68.1 in April amid forecasts for a 61.0 print, and the greenback may trade heavy going into May as the FOMC is widely expected to retain its highly accommodative policy stance throughout the first-half of the year. As the index struggles to hold above the 10,450 region, we may see the downward trend continue to take shape over the next 24-hours of trading, but we should see a near-term correction in the greenback as the 30-minute relative strength index comes up against oversold territory. As the dollar appears to be finding trendline support, the index looks poised for a bounce going into the FOMC interest rate decision, and the fresh batch of central bank rhetoric may instill a bullish outlook for the USDOLLAR should we see a greater discussion to scale back on quantitative easing. 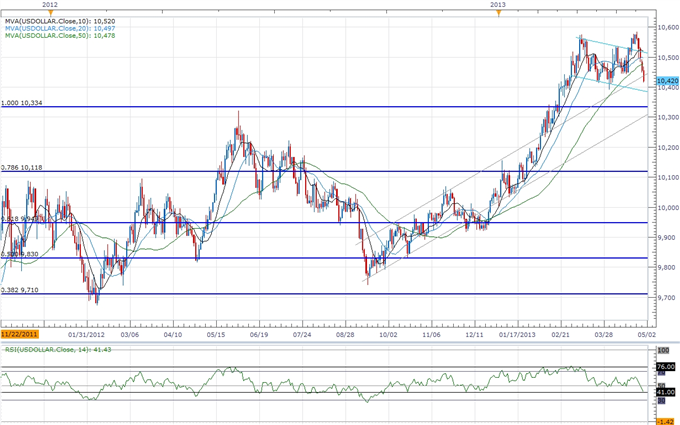 As the Fed adopts a ‘qualitative approach’ for monetary policy, we should see the central bank endorse its highly accommodative policy stance in the month ahead, but the committee may sound more upbeat this time around as the economic recovery gradually gathers pace. Indeed, the resilience in private sector consumption along with the budding recovery in the housing market may encourage the FOMC take up a more neutral to hawkish tone for monetary policy as the world’s largest economy gets on a more sustainable path. As the USDOLLAR falls back within the downward trending channel carried over from March, we will keep a close eye on the relative strength index as it comes up against interim support (41), and we may see the dollar regain its footing ahead of the highly anticipated U.S. Non-Farm Payrolls report should the Fed scale back its willingness to expand the balance sheet further.

The greenback continued to weaken across the board, led by a 0.54 percent advance in the Euro, but the rebound in the EURUSD may taper off going into May as it maintains the range from earlier this month. Although a close above the 38.2 percent Fibonacci retracement from the 2009 high to the 2010 low around 1.3120 would negate the head-and-shoulders reversal pattern, we will maintain a bearish outlook for the single currency as the economic downturn in the euro-area threatens price stability. As the region faces record-high unemployment along with slowing inflation, we should see the European Central Bank (ECB) further embark on its easing cycle throughout 2013, and the Governing Council may introduce more non-standard measures over the coming months as the region struggles to emerge from the recession.