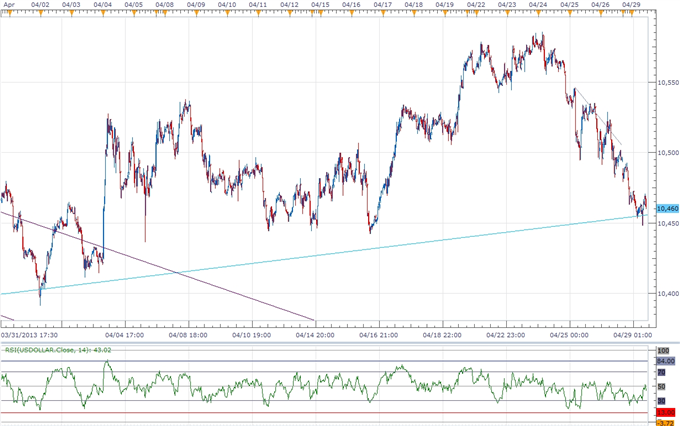 Although the Dow Jones-FXCM U.S. Dollar Index (Ticker: USDollar) is trading 0.35 percent lower from the open, we may see the greenback continue to find interim support around the 10,450 region as the 30-minute relative strength index bounces back from oversold territory. Although wage growth in the U.S. remains subdued, the resilience in Personal Spending along with the 1.5 percent rise in Pending Home Sales encourages an improved outlook for the world’s largest economy, and the Fed may sound more upbeat this time around as the recovery gradually gathers pace. In turn, we may see the dollar continue to carve a higher low ahead of the FOMC interest rate decision on tap for later this week, and the greenback remains poised to mark fresh highs over the near to medium-term as the central bank appears to be slowly moving away from its easing cycle. 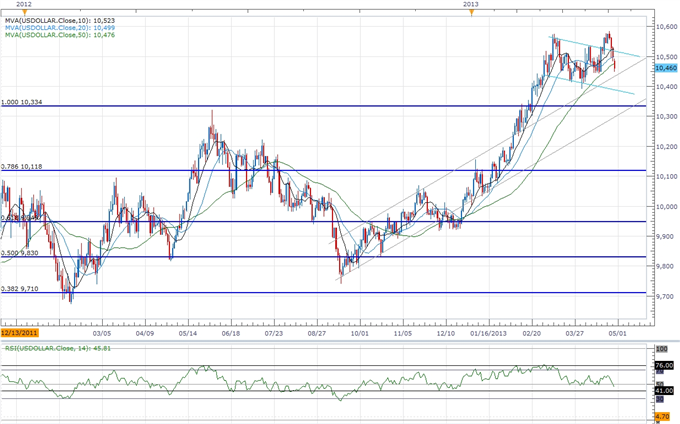 Despite the strength in private sector consumption, the Dallas Fed Manufacturing survey weakened to -15.6 in April to mark the lowest reading since July, and the lull in business outputs may encourage the FOMC to preserve its highly accommodate policy stance for most of 2013 in an effort to encourage a stronger recovery. However, we may see a greater argument to scale back on quantitative easing as the U.S. economy gets on a more sustainable path, and a growing number of Fed officials may dissent alongside Esther George as the outlook for growth and inflation improves. In turn, the USDOLLAR may continue to carve out a series of higher highs paired with higher lows, and we will continue to buy dips in the greenback as long as Fed Chairman Ben Bernanke sees limited scope to expand asset purchase program beyond the $85B monthly limit. As the USDOLLAR carves out a higher low this month, the dollar looks poised for a more meaningful run at the 10,600 figure, and the bullish sentiment surrounding the greenback may gather pace throughout the year as market participants scale back bets for additional monetary support.

The greenback weakened across the board, led by a 0.78 percent rally in the Australian dollar, but we may see the higher-yielding currency struggle to hold its ground ahead of the next Reserve Bank of Australia (RBA) policy meeting on May 7 as market participants see the central bank pushing the benchmark interest rate to a fresh record-low in the coming months. Beyond the slowdown in China – Australia’s largest trading partner – easing price pressures in the $1T economy may push the RBA to further support the uneven recovery in the region, and we may see Governor Glenn Stevens retain a dovish tone for monetary policy throughout 2013 in an effort to stem the downside risks for growth and inflation. In turn, we should see the AUDUSD maintain the downward trend dating back to 2011, and the pair remains poised to give back the rebound from 1.0114 as the RBA continues to embark on its easing cycle.