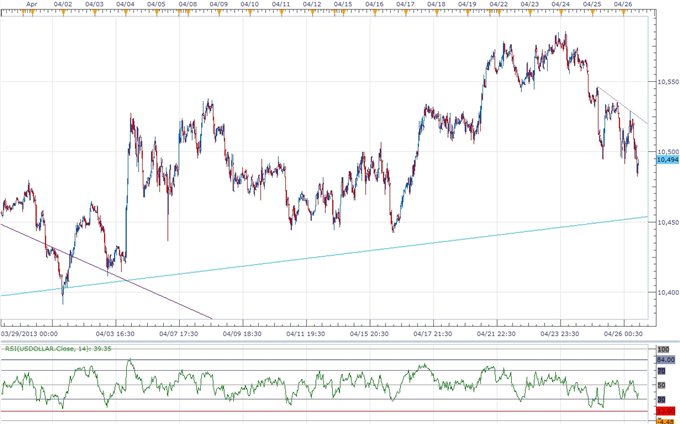 Although the Dow Jones-FXCM U.S. Dollar Index (Ticker: USDollar) remains 0.32 percent lower from the open, we may see the greenback consolidate over the remainder of the North American session as the 30-minute relative strength index comes up against oversold territory. Indeed, the advance 1Q GDP report fell short of market expectations as the growth rate increased an annualized 2.5 percent, but the pickup in private sector consumption instills an improved outlook for the world’s largest economy as it remains one of the leading drivers of growth. In turn, we may see the reserve currency regain its footing ahead of the FOMC interest rate decision on May 1 as the central bank is widely expected to maintain its current policy next week. 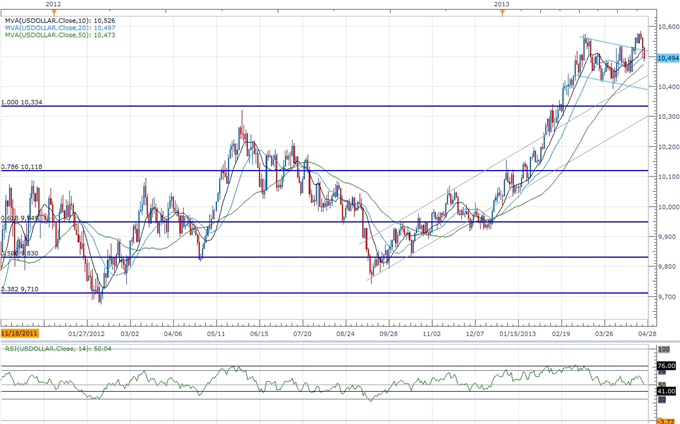 We anticipate the FOMC to maintain its asset purchase program at $85/month in an effort to spur a stronger recovery, but we may see a growing discussion to scale back on quantitative easing as the resilience in private sector consumption along with the budding recovery in the housing market raises the outlook for growth. As a result, the committee may raise its fundamental assessment for the U.S. economy, and the Fed may strike a more neutral to hawkish tone for monetary policy as the recovery gradually gathers pace. In turn, we may see the USDOLLAR carve out a higher low around the 10,500 region, and the bullish flag formation may continue to take shape in May as market participants scale back bets of seeing the FOMC expanding its balance sheet further.

The greenback weakened against three of the four components, led by a 1.46 percent rally in the Japanese Yen, and the low-yielding currency may continue to gain ground against its U.S. counterpart as the Bank of Japan (BoJ) moves to the sidelines. As the USDJPY carves a double-top just below the 100.00 figure, the near-term reversal may push the exchange rate back towards 95.90-96.00 – the 78.6 percent retracement from the 2009 high to the 2011 low – but we will look to buy dips on a longer-term scale as Governor Haruhiko Kuroda adopts a more aggressive approach in achieving the 2 percent target for inflation. The deviation in the policy outlook should drive the USDJPY higher over the longer-term, and we may see the pair threaten the 100.00 figure should the FOMC talk down bets for more QE.