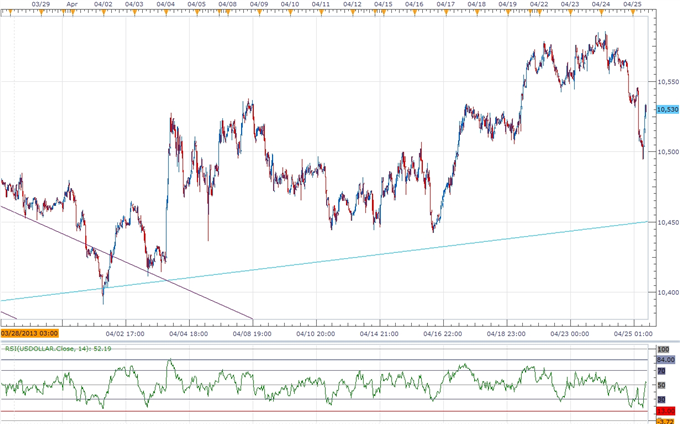 USD to Benefit from Faster Growth, AUD Rebound to Fizzle

Although the Dow Jones-FXCM U.S. Dollar Index (Ticker: USDollar) is trading 0.36 percent lower from the open, we’re seeing the 30-minute relative strength index snap back from oversold territory, and the greenback may continue to consolidate ahead of the advance GDP report as the U.S. economy is expected to expand at a faster pace during the first three-months of 2013. As the outlook for growth and inflation improves, the index may carve fresh highs ahead of the next FOMC interest rate decision on May 1, and the bullish sentiment surrounding the reserve currency may gather pace in the month ahead should the central bank scale back its willingness to expand the balance sheet further. In turn, we will continue to buy dips in the USDOLLAR, and the greenback may appreciate throughout 2013 amid the shift in the policy outlook. 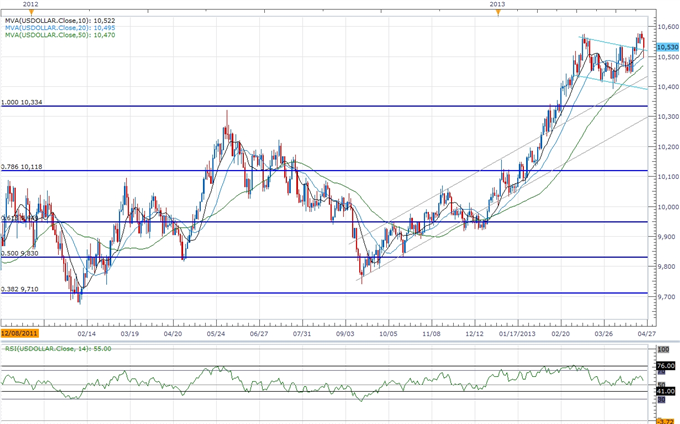 Although the FOMC continues to promote its highly accommodative policy stance, the committee may further discuss the prospects of scaling back its asset purchase program as the U.S. economy is expected to grow an annualized 3.0 percent in the first-quarter. At the same time, Personal Consumption is projected to increase 2.8% following the 1.8% expansion during the last three-months of 2012, and the resilience in private sector spending may instill an improved outlook for the region as it remains one of the leading drivers of growth. As the U.S. gets on a more sustainable path, we should see a growing number of central bank officials adopt a more neutral to hawkish tone for monetary policy, and we may see the FOMC slowly move away from its easing cycle throughout the course of the year as the economic recovery gradually gathers pace. In turn, we continue to look for a more meaningful move at the 10,600 figure, and the bullish flag formation may continue to take shape in the month ahead as the fundamental outlook for the region improves.

Three of the four components weakened against the greenback, led by a 1.09 percent rally in the British Pound, which was following by a 0.32 percent advance in the Australian dollar. As the AUDUSD find interim support around the 50.0 percent Fibonacci retracement from the 2011 low to high around 1.0230, the pair looks poised to preserve the range-bound price action ahead of the next Reserve Bank of Australia (RBA) interest rate decision on May 7, but we may see the downward trend dating back to 2011 continue to take shape as market participants still see the central bank pushing the benchmark interest rate to a fresh record-low. According to Credit Suisse overnight index swaps, market participants are pricing a 41 percent chance for a 25bp rate cut next month, while the RBA is expected to push the cash rate to 2.50 percent from 3.00 percent in the next 12-months as the region faces an uneven recovery. In turn, we may see the AUDUSD continue to give back the rebound from March (1.0114), and the pair may fall back towards party ahead of the second-half of the year as the fundamental developments coming out of China – Australia’s largest trading partner – continues to highlight the risk for a hard-landing.