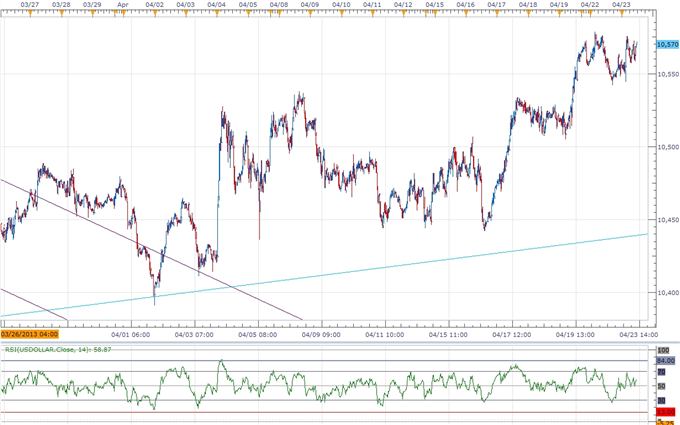 The Dow Jones-FXCM U.S. Dollar Index (Ticker: USDollar) remains 0.24 percent higher on the day as New Home Sales increased 1.5 percent in March amid forecasts for a 1.1 percent rise, and the greenback may continue to press towards the 10,600 region as the advance 1Q GDP report is expected to show the world’s largest economy expanding at a faster pace. However, as demands for U.S. Durable Goods are projected to fall 3.0 percent in March, a dismal development may drag on the dollar over the next 24-hours of trading, and the reserve currency may face a small correction in the days ahead should the data fuel speculation for further Fed support. Nevertheless, we will look for further USD strength on a longer time scale as the FOMC shows a greater willingness to scale back its asset purchase program, and the bullish sentiment surrounding the reserve currency should continue to take shape as the central bank turns increasingly upbeat towards the economy. 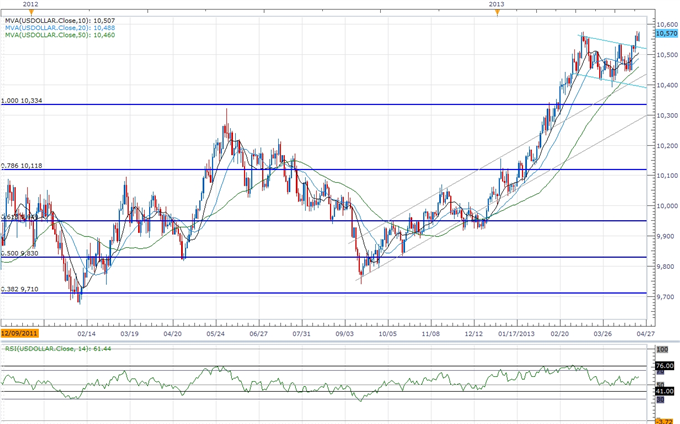 Although demands for large-ticket items are expected to falter in March, the gauge for future investments – Non-Defense Capital Goods Orders excluding Aircrafts – is expected to increase 0.3 percent, and the rebound in business spending may limit the downside risk for the greenback as the world’s largest economy gets on a more sustainable path. In turn, we may see a growing number of Fed officials adopt a more neutral to hawkish tone for monetary policy in the coming months, and the central bank may start to discuss a tentative exit strategy later this year as the economic recovery gradually gathers pace. As a result, we are still looking for a run at the 10,600 region, and the index looks poised to mark fresh 2013 highs as the bullish flag pattern continues to pan out.

The greenback rallied across the board, led by a 0.39 percent decline in the Euro, while the Japanese Yen is struggling to hold its ground ahead of the Bank of Japan (BoJ) interest rate decision on tap for later this week as the central bank adopts a more aggressive approach in achieving the 2 percent target for inflation. After expanding its bond purchasing program to JPY 7 trillion earlier this month, the BoJ may stick to the sidelines this time around, but Governor Haruhiko Kuroda may broaden the scope of the non-standard measure to include a greater range of asset in order to encourage a stronger recovery. At the same time, there’s speculation that the BoJ will raise its inflation forecast and see that it gets hit by the Spring of 2015 following a report by the Nikkei, and the statement accompanying the rate decision may dampen the appeal of the Japanese Yen as central bank continues to embark on its easing cycle. In turn, the USDJPY may finally clear the 100.00 figure following the BoJ, but the near-term reversal may continue to take shape should the central bank merely reiterate its dovish tone for monetary policy.