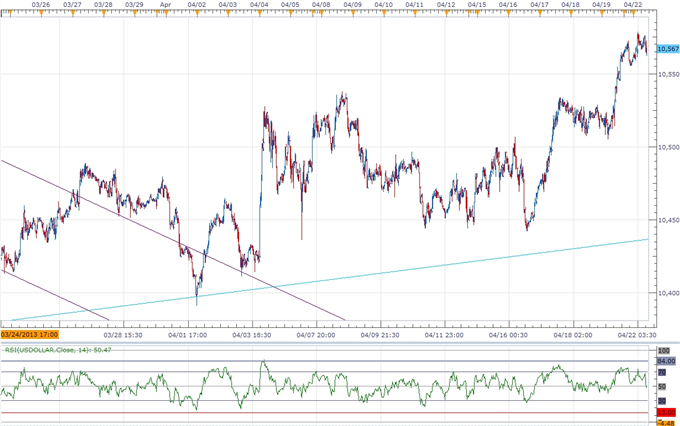 USDOLLAR Presses Toward 10600- AUD Range in Focus Ahead of RBA

Although the Dow Jones-FXCM U.S. Dollar Index (Ticker: USDollar) is trading 0.04 percent higher from the open, Existing Home Sales in the world’s largest economy contracted 0.6 percent during the month of March amid forecasts for a 0.4 percent rise, and the greenback may struggle to hold its ground throughout the North American trade as the data dampens the outlook for growth. As the 30-minute relative strength falls back from overbought territory, we should see a more meaningful correction over the next 24-hours of trading, and we may see a move back towards the 10,500 as the index continues to carve a series of higher highs paired with higher lows. In turn, we will continue to look for opportunities to buy dips in the USDOLLAR, and the bullish sentiment surrounding the greenback may gather pace over the near to medium-term as the central bank continues to see a gradual recovery this year. 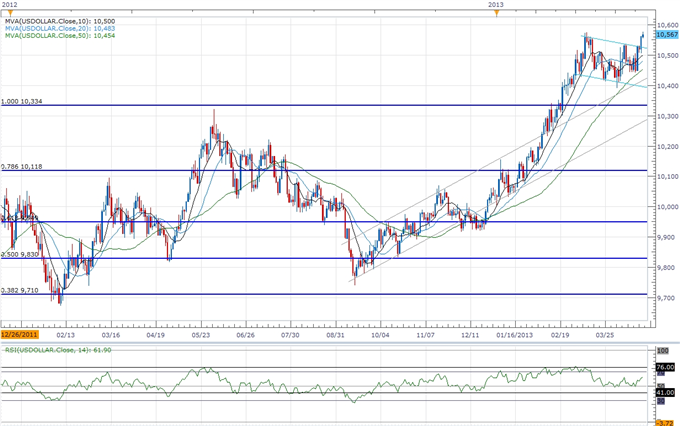 New York Fed President William Dudley argued that ‘more needs to be done’ amid the ongoing slack in the real economy, but went onto say that ‘the economic outlook appears to be gradually improving’ as the central bank preserves its highly accommodative policy stance. Nevertheless, according to a Bloomberg News survey, 14 of the 21 primary bond dealers see the FOMC scaling back its asset purchasing program in the fourth-quarter of 2013, and we may see a growing number of Fed officials start to discuss a tentative exit strategy over the coming months as the world’s largest economy gets on a more sustainable path. As the bullish flag pattern continues to play out, the USDOLLAR may finally test the 10,600 figure in the days ahead, and we will maintain a bullish forecast for the reserve currency amid the shift in the policy outlook.

The greenback advanced against two of the four components, led by a 032 percent decline in the Australian dollar, and the AUDUSD may continue to give back the rebound from March (1.0114) as the slowing recovery in China –Australia’s largest trading partner – fuels expectations for lower borrowing costs. According to Credit Suisse overnight index swaps, market participants still see the Reserve Bank of Australia (RBA) pushing the benchmark interest rate to a fresh record-low in the next 12-months, and the AUDUSD remains at risk for further losses as it maintains the downward trend from back in 2011. However, we may see the aussie-dollar consolidate over the next 24-hours of trading as it comes up against the 50.0 percent Fibonacci retracement from the 2011 high to low around 1.0230, and we will wait for a near-term bounce to sell the AUDUSD as the pair maintains the broad range carried over from the previous year.