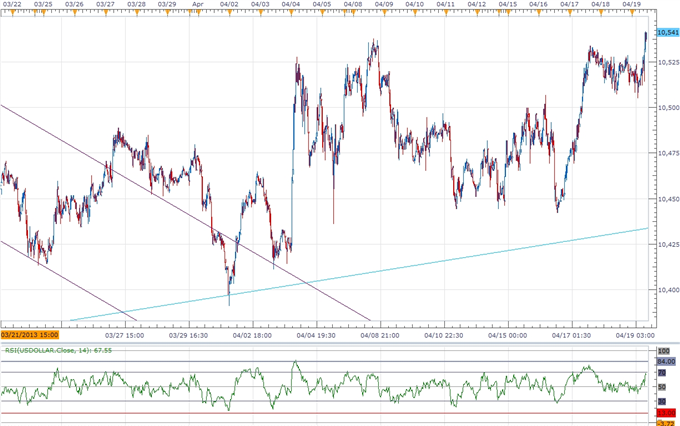 The Dow Jones-FXCM U.S. Dollar Index (Ticker: USDollar) is 0.18 percent lower from the open after moving 71 percent of its average true range, and the reserve currency may continue to gain ground in the week ahead as the advance 1Q GDP report is expected to show the growing rate increasing an annualized 3.0 percent following the 0.4 percent expansion during the last three-months of 2012. In turn, the bullish sentiment surrounding the greenback should continue to pick up over the near to medium-term, but we may see the dollar consolidate going into the following week as the 30-minute relative strength index comes up against overbought territory. Nevertheless, we will maintain a bullish outlook for the USDOLLAR as it carves out a higher low around the 10,450 region, and the reserve currency may appreciate further ahead of the next FOMC interest rate decision on May 1 as the central bank continues to highlight the resilience in private sector consumption along with the budding recovery in the housing market. 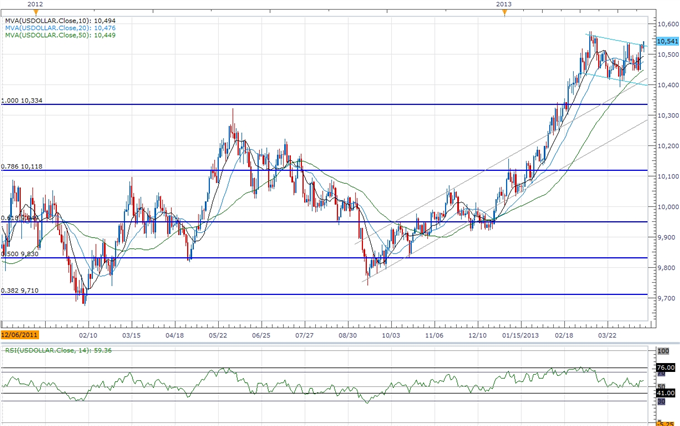 As the FOMC sticks to its highly accommodative policy stance, German Finance Minister Wolfgang Schaeuble warned that Fed Chairman Ben Bernanke can only help the U.S. to ‘buy time,’ and argued that the central bank cannot ‘solve the problems in substance of the economy’ as monetary policy remains a blunt instrument. As a growing number of Fed officials scale back their willingness to expand the balance sheet further, positive developments coming out of the world’s largest economy should prop up the USD, and the bullish flag formation should continue to take shape in the coming days as price action breaks above trendline resistance. In turn, we may finally see the index make another run at the 10,600 figure, and we will continue to buy dips in the greenback amid the shift in the policy outlook.

Two of the four components weakened against the greenback, led by a 1.14 percent decline in the Japanese Yen, and the low-yielding currency following the Bank of Japan (BoJ) policy meeting on April 26 as the central bank takes a more aggressive approach in achieving the 2 percent target for inflation. Indeed, there’s speculation that the BoJ will raise its inflation outlook as it expands its bond-buying program to JPY 7 trillion a month, while there’s growing bets that Governor Haruhiko Kuroda will broaden the scope of its quantitative easing program to include a greater range of asset classes. Any developments pointing to more monetary easing should generate further weakness in the Japanese Yen, but the USDJPY may continue to hold below the 100.00 figure should the central bank move to the sidelines.