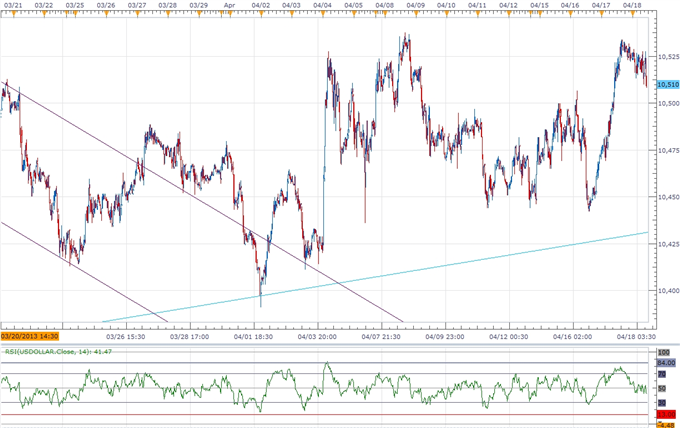 The Dow Jones-FXCM U.S. Dollar Index (Ticker: USDollar) is trading 0.20 percent lower from the open after moving 45 percent of its average true range, and the reserve currency continue to consolidate over the remainder of the week as market participants turn their attention to the G20 meeting in Washington. As the index maintains the range-bound price action from earlier this month, the dollar may track sideways ahead of the next FOMC interest rate decision on May 1, but the bullish sentiment surrounding the reserve currency may gather over the near to medium-term as a growing number of central bank officials scale back their willingness to expand the balance sheet further. In turn, we may see the USDOLLAR continue to build a higher base around the 10,450 region, and we will maintain a bullish outlook for the greenback amid the shift in the policy outlook. 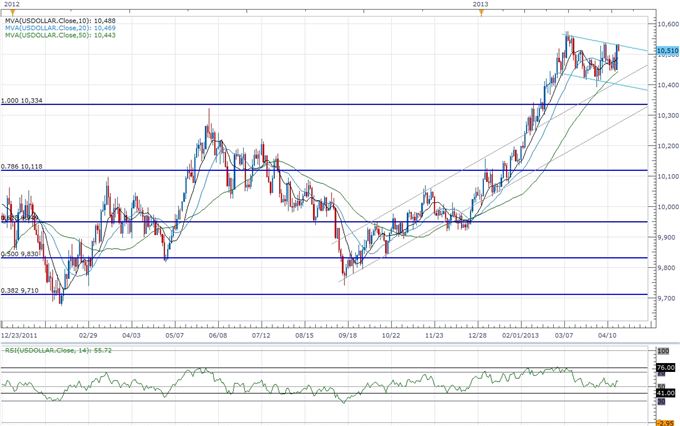 Although Richmond Fed President Jeffrey Lacker said disinflation in the U.S. raises the scope for additional monetary support, the central banker continued to speak out against the non-standard measures and favors ending quantitative easing now as world’s largest economy gets on a more sustainable path. At the same time, Minneapolis Fed President Narayana Kocherlakota warned that the central bank’s zero-interest rate policy (ZIRP) is likely to generate financial instability amid ‘inflated asset prices, high asset return volatility and heightened merger activity,’ but we may see the FOMC retain the highly accommodative policy stance throughout 2013 in an effort to encourage a stronger recovery. As the USDOLLAR remains stuck in the bullish flag formation, we will look for opportunities to buy dips in the greenback, and we will continue to look for a run at 10,600 as the fundamental outlook for the U.S. improves.

Three of the four components rallied against the greenback, led by a 0.37 percent advance in the Euro, while the Japanese Yen bucked the trend as the Bank of Japan (BoJ) takes a more aggressive approach in addressing the risks surrounding the region. Indeed, the Nikkei newspaper said the BoJ will raise its inflation forecast at the next rate decision on April 26 as the central bank now looks to purchase JPY 7 trillion in government bond on a monthly basis, and the low-yielding currency remains poised to face additional headwinds throughout 2013 as Governor Haruhiko Kuroda pledges to achieve the 2 percent target for inflation. Although market participants continue to look for a more meaningful reversal in the Japanese Yen, we anticipate a shallow correction in the USDJPY amid the deviation in the policy outlook.