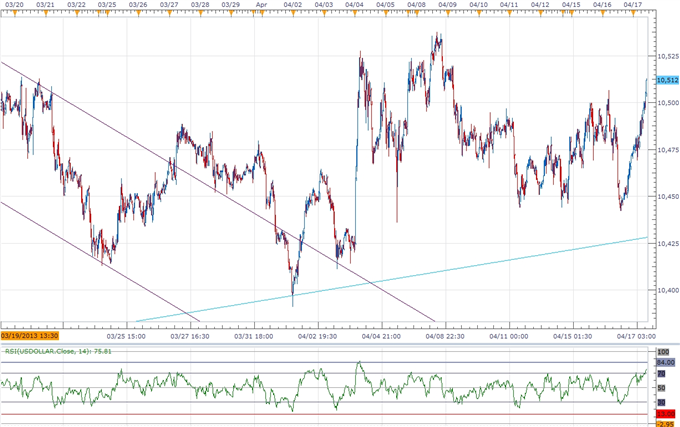 USDOLLAR Breakout Hinges on Fed- Higher Base in Place

Although the Dow Jones-FXCM U.S. Dollar Index (Ticker: USDollar) is trading 0.59 percent higher from the open, the greenback may face a small correction ahead of the Fed’s Beige Book as the 30-minute relative strength index pushes into overbought territory. In turn, we may see the reserve currency struggle to hold above the 10,500 figure, but the central bank survey may prop up the greenback throughout the North American trade should the district banks dampen speculation for additional monetary support. As the USDOLLAR appears to be carving out a higher base around the 10,450 region, we may see another run at the 10,600 figure in the days ahead, and the bullish sentiment surrounding the reserve currency may gather pace over the near to medium-term as a growing number of Fed officials adopt a more neutral to hawkish tone for monetary policy. 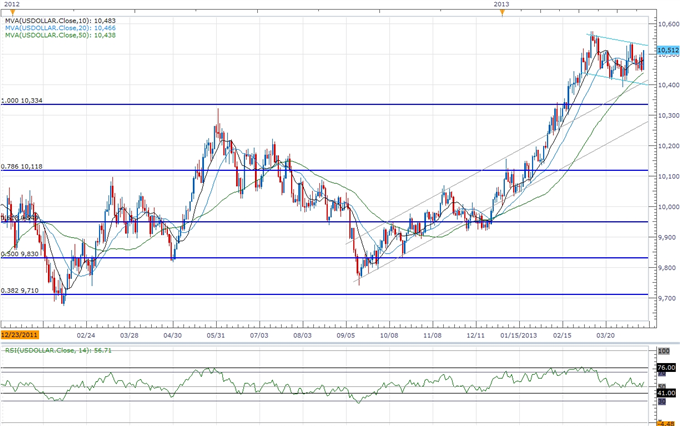 St. Louis Fed President James Bullard spoke out against the FOMC’s ‘qualitative approach’ for monetary policy and argued that ‘the essential problem is that monetary policy is not a good tool to address labor market inefficiency,’ and went onto say that that ‘frontline research suggests that price-stability remains the policy advice even in the face of serious labor market inefficiencies’ as monetary policy remains a blunt tool. As the FOMC continues to push into unchartered territory, we may see a growing number of central bank officials scale back their support to maintain the highly accommodative stance for a prolonged period of time, and the committee may start to discuss a tentative exit strategy in the second-half of the year as the economy gets on a more sustainable path. In turn, we still anticipate further advances in the USDOLLAR as the bullish flag formation remains in play, and the greenback remains poised to mark fresh highs amid the shift in the policy outlook.

All four components weakened against the greenback, led by a 0.86 percent decline in the British Pound, but the recent weakness in the sterling may be short-lived as the Bank of England (BoE) sticks to the sidelines. Although there’s speculation that the BoE will embark on more quantitative easing when Bank of Canada (BoC) Governor Mark Carney takes the helm in July, but the Monetary Policy Committee may refrain from expanding the balance sheet further as it looks to extend the Funding for Lending Scheme. Nevertheless, as the GBPUSD struggles to hold above the 50.0 percent Fibonacci retracement from the 2009 low to high around 1.5260, the pair may continue to give back the rebound from March (1.4830), but the fundamental developments coming out of the U.K. may alleviate downside pressures on the sterling as the economic recovery slowly picks up.