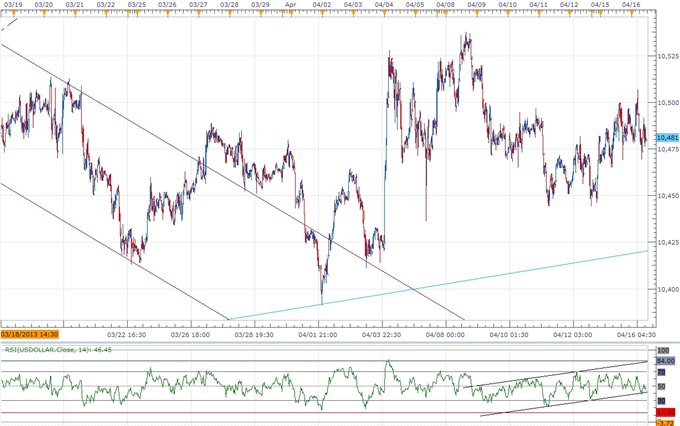 USD to Consolidate Within Bullish Formation Ahead Fed Survey

Although the Dow Jones-FXCM U.S. Dollar Index (Ticker: USDollar) remains 0.08 percent lower from the open, the greenback appears to be coiling up for a run at the monthly high (10,538) as the fundamental developments coming out of the world’s largest economy shows a more broad-based recovery. Although Building Permits slipped 3.9 percent in March, the 7.0 percent rise in Housing Starts along with the 0.4 percent advance in Industrial Production has helped to propped up the dollar, and the greenback may track higher ahead of the Fed’s Beige Book on tap for Wednesday as the central bank scales back its dovish tone for monetary policy. As the 30-minute relative strength index appears to be holding within the upward trending channel carried over from the previous week, the USDOLLAR may continue to retrace the decline from earlier this month, and the bullish sentiment surrounding the reserve currency may gather pace over the near to medium-term amid the shift in the policy outlook. 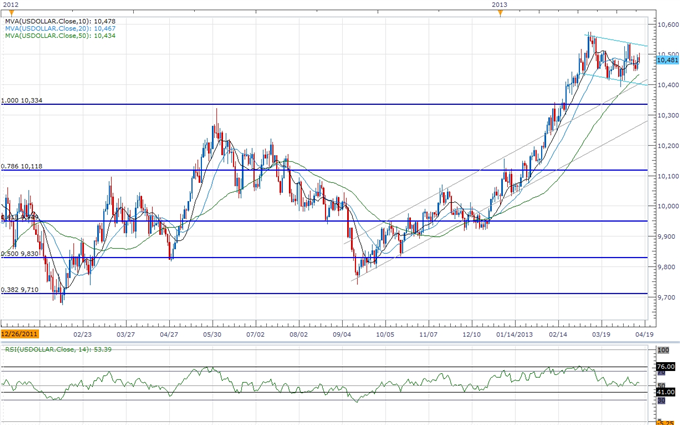 Although New York Fed President William Dudley and Chicago Fed President Charles Evans endorsed a highly accommodative policy stance for the U.S., Philadelphia Fed President Charles Plosser argued ‘we should shrink the size of our balance sheet consistent with this framework and we should shorten the duration and return the composition of our portfolio to all Treasuries’ as the economy gets on a more sustainable path. As a growing number Fed officials see scope to scale back on quantitative easing, the committee may start to draw up a tentative exit strategy over the coming months as the ongoing expansion in the balance raises the long-term risk for inflation. As the bullish flag formation remains in play, we may see the dollar continue to consolidate in the days ahead, but the Fed’s economic survey may serve as the fundamental catalyst to spark a topside break in the index should the district banks strike an improved outlook for the U.S.

The greenback weakened against three of the four components, led by a 0.76 percent rally in the Euro, while the Japanese Yen bucked the trend, with the USDJPY climbing to a high of 98.14. As the dollar-yen fills in the gap from April 8, market participants are looking for a more meaningful reversal in the exchange rate following the failed run at 100.00, but the pair may face a very shallow correction amid the deviation in the policy outlook. As the Bank of Japan (BoJ) takes a more aggressive approach in achieving the 2 percent target for inflation, we anticipate further advances in the USDJPY, and we will maintain our game plan of buying dips in the pair as central bank Governor Haruhiko Kuroda continues to embark on the easing cycle.