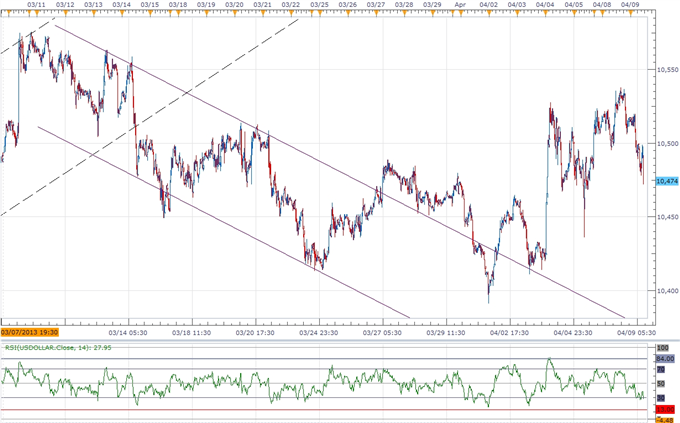 USD to Consolidate Ahead of FOMC Minutes- AUD Capped by 1.05

Although the Dow Jones-FXCM U.S. Dollar Index (Ticker: USDollar) is trading 0.54 percent lower from the open, the sharp decline is likely to be short-lived as the 30-minute relative strength index dips back into oversold territory. In turn, we should see a short-term rebound in the dollar, but the greenback may hold steady going into the FOMC Minutes as market participants weigh the outlook for monetary policy. As a growing number of central bank officials favor adjusting the asset purchase program, the shift in the policy outlook may pave the way for another run at 10,600, and we may see the Fed slowly move away from its easing cycle over the coming months as the U.S. economy gets on a more a sustainable path. 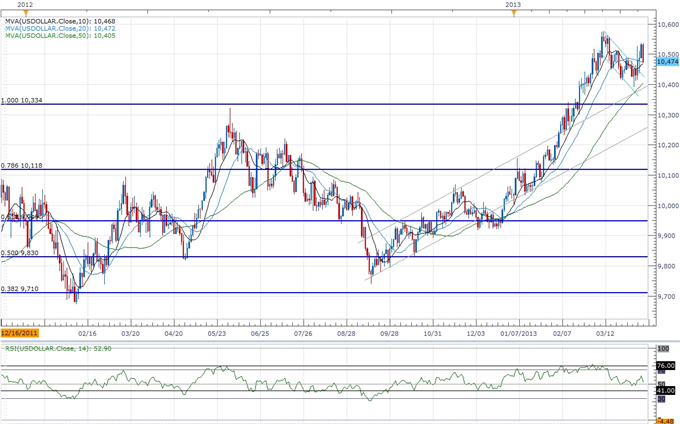 Although Fed Chairman Ben Bernanke said asset sales will be ‘ late’ in the tightening process, Richmond Fed President Jeffrey Lacker said monetary policy will ‘eventually’ return to normal after warning that the ballooning balance sheet presents additional risk to the central bank. As growth and inflation picks up, a greater number of Fed policy makers are likely to adopt a more neutral to hawkish tone for monetary policy, and we may see the FOMC scale back on quantitative easing over the coming months amid the resilience in private sector consumption along with the budding recovery in the housing market. We’re still looking for higher prices in the USDOLLAR as the bullish flag formation continues to pan out, and the fresh batch of central bank rhetoric due out in the coming days may carry the greenback higher as market participants scale back bets for additional monetary support.

The greenback weakened across the board, led by a 0.75 percent rally in the Australian dollar, but we may see the AUDUSD maintain the downward trend dating back to 2011 as the pair remains capped by the 1.0500 figure. Although Australian Treasurer Wayne Swan sees the interest rate cuts by the Reserve Bank of Australia (RBA) still funneling through the real economy, the central bank remains poised to push the benchmark interest rate to a fresh record-low amid the uneven recovery, and Governor Glenn Stevens may embark on the easing cycle throughout the year in order to stem the downside risks for growth and inflation. As the AUDUSD continues to carve out a lower top in April, the pair looks poised to give back the rebound from the previous month (1.0114), and the exchange rate may fall back towards parity in the coming months amid the deviation in the policy outlook.