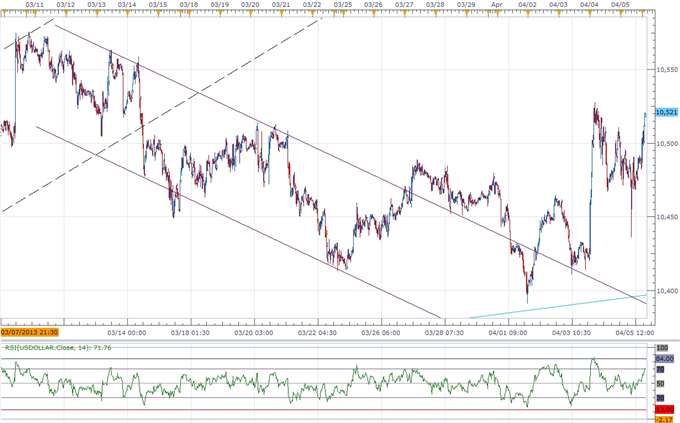 The Dow Jones-FXCM U.S. Dollar Index (Ticker: USDollar) is 0.09 percent higher from the open after moving only 57 percent of its average true range, and the greenback may continue to retrace the decline from the previous month as it breaks out of the downward trending channel from the March high (10,576). Although the dismal Non-Farm Payrolls report dampens the outlook for growth, the resilience in private sector consumption along with the budding recovery in the housing market may foster faster job growth throughout the course of the year as the U.S. economy gets on a more a sustainable path. Nevertheless, the dollar may face a small pullback over the next 24-hours of trading as the 30-minute relative strength index comes up against overbought territory, but the bullish breakout in the reserve currency may continue to gather pace as it carves a higher low around the 10,400 region. 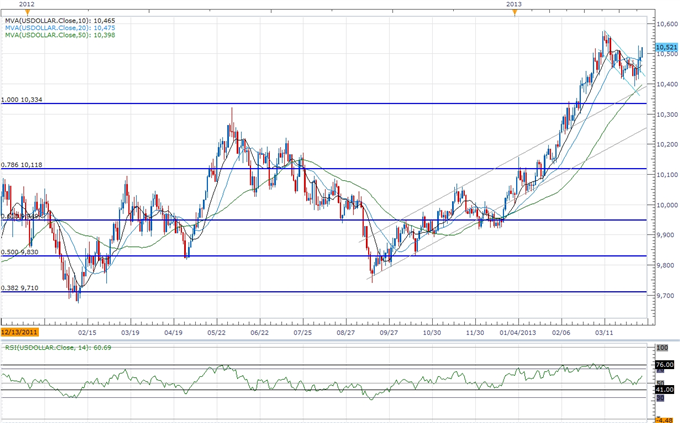 Despite the recent slowdown in the U.S. economy, Cleveland Fed President Sandra Pianalto struck a rather hawkish tone for monetary policy and warned that the ongoing expansion in the central bank balance sheet ‘could present its own uncertainties and risks’ as it complicates the exit strategy. As the Federal Open Market Committee continues to push into unchartered territory, a growing number of central bank officials may turn increasingly cautious on quantitative easing, and we may see the committee slowly move away from its easing cycle later this year as the recovery gradually gathers pace. As the bullish flag formation continues to pan out, the dollar looks poised to make another run at the 10,600 figure, and the FOMC Minutes on tap for later this week may instill a bullish outlook for the reserve currency should the central bank adopt a more neutral to hawkish tone for monetary policy.

The greenback advanced against two of the four components, largely driven by the 1.31 percent decline in the Japanese Yen, but we may see the USDJPY dip lower before making a further advances as the pair as yet to fill-in the gap from the Sunday open (98.23). Nevertheless, the Japanese Yen remains at risk for further losses as the Bank of Japan (BoJ) takes a more aggressive approach in achieving the 2 percent target for inflation, and we should see the upward trending channel in the dollar-yen continue to take shape amid the deviation in the policy outlook. In turn, we will maintain our game plan of buying dips in the USDJPY, but we will be keeping a close eye on the relative strength index as it pushes into overbought territory.