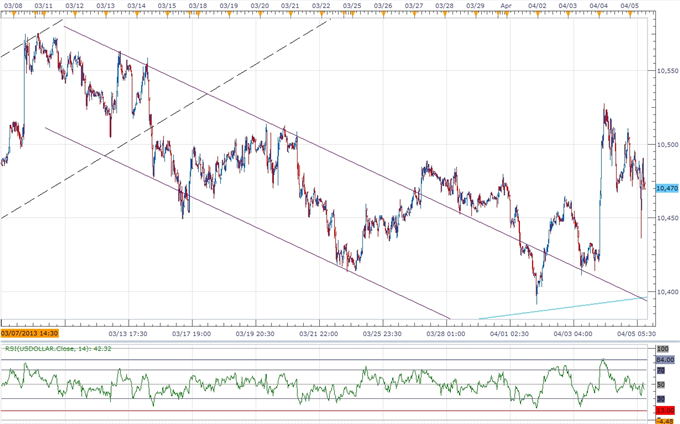 The Dow Jones-FXCM U.S. Dollar Index (Ticker: USDollar) tumbled to a low of 10,437 as Non-Farm Payrolls grew at the slowest pace since June 2012, and the ongoing weakness in the labor market may continue to dampen the appeal of the reserve currency as the participation rate slips to the lowest level since 1979. However, as the index holds above the 10,400 region, we may see the dollar continue to carve a short-term base around the key figure, and the reserve currency may consolidate over the remainder of the North American trade as the 30-minute relative strength index bounces back ahead of oversold territory. Despite the dismal employment report, one dismal NFP reading is likely to have a limited impact in skewing the Fed’s outlook for the world’s largest economy, and we may see a growing number of central bank officials adopt a more neutral to hawkish tone for monetary policy as the economic recovery gradually gathers pace. 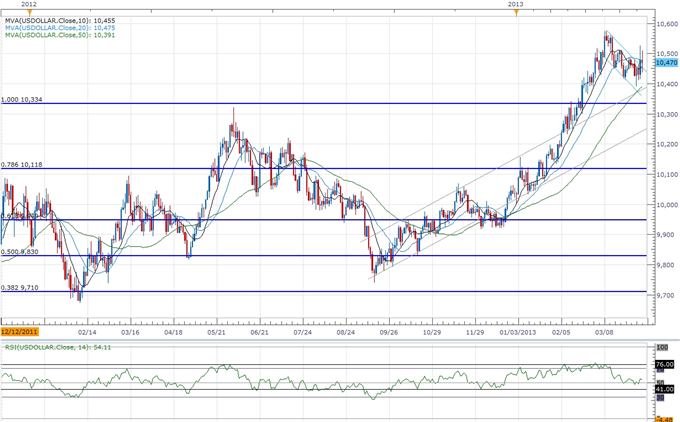 Although ‘both legs of the dual mandate call for a highly accommodative monetary policy,’ FOMC board member Janet Yellen appears to be changing her stance as she favors ‘adjusting the pace of asset purchases.’ However, Boston Fed President Eric Rosengren, who also serves on the FOMC this year, argued that the protracted recovery in the labor market may require a ‘more aggressive response,’ and went onto say that ‘continued accommodative policy, such as continuing our asset purchase program through this year, is an appropriate response to labor market scarring.’ In turn, the FOMC Minutes on tap for the following week may continue to support the highly accommodative policy stance, but the central bank may strike an improved outlook for the world’s largest economy as it gets on a more sustainable path. Nevertheless, we may see the bullish flag pattern continue to pan out as the USDOLLAR breaks out of the descending channel, and the greenback appears to be coiling up for another run at the 10,600 figure amid the rebound in the relative strength index.

Two of the four components advanced against the greenback, led by a 0.73 percent rally in the Euro, while the Japanese Yen shed another 0.66 percent, with the USDJPY crossing above the 97.00 figure for the first time since August 2009. Although there appears to be a bearish divergence on the relative strength index, an upward trending channel appears to be taking shape as the pair carves out a higher low above 92.50, but we will stick to our game plan of buying dips in the exchange rate as the Bank of Japan (BoJ) adopts a more aggressive approach in addressing the risks surrounding the region.