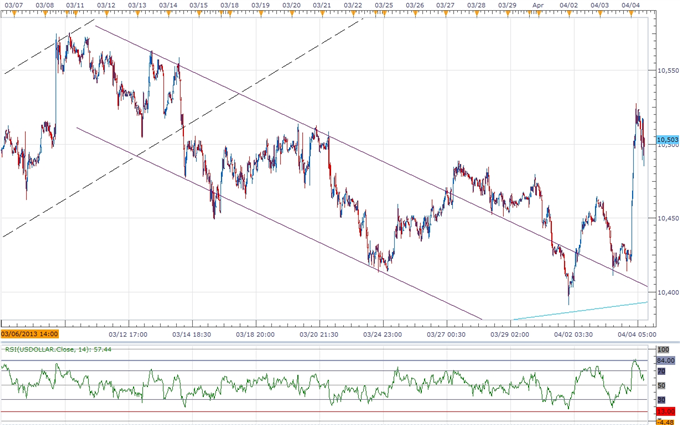 USDOLLAR Bullish Formation in Focus Ahead of NFPs- Eyes 10,600

The Dow Jones-FXCM U.S. Dollar Index (Ticker: USDollar) is trading 0.70 percent higher from the open after moving a whopping 223 percent of its average true range, and the greenback may continue to retrace the decline from the previous month as it carves out a higher low around the 10,400 region. Although we’re looking for a short-term pullback given the overbought signal on the 30-minute relative strength index, we may see the dollar hold steady going into the highly anticipated Non-Farm Payrolls report as the world’s largest economy is expected to add another 190K jobs in March. At the same time, the slew of Fed speeches on tap for later today may keep the reserve currency afloat as the central bank appears to be slowly moving away from tis easing cycle. 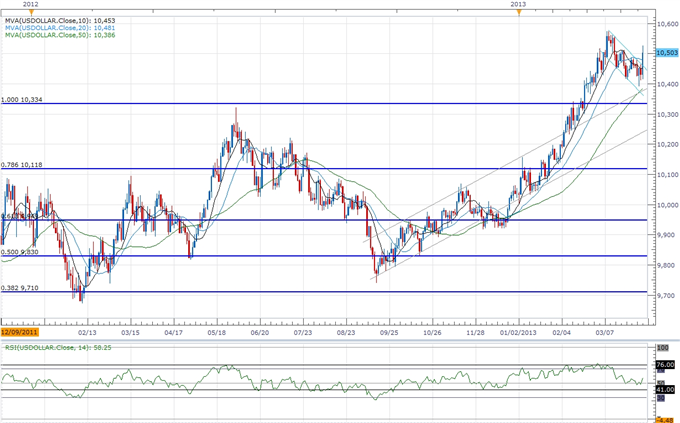 As a growing number of central bank officials see potential to scale back on quantitative easing, the fresh batch of central bank rhetoric may heighten the bullish sentiment surrounding the dollar, and the FOMC may start to lay out a tentative exit strategy over the coming months as the world’s largest economy gets on a more sustainable path. As the USDOLLAR breaks out of the downward trending channel carried over from March, we should see the broader bullish flag formation come into play, and the greenback looks primed for another run at 10,600 as it carves out a higher low in April. As the daily relative strength index bounces back ahead of support (41), the sharp rebound in the reserve currency may gather pace over the remainder of the week, but the greenback may struggle to maintain the rebound from the monthly low (10,391) should NFPs disappoint.

Three of the four components weakened against the greenback, led by a 3.02 percent decline in the Japanese Yen, and the selloff in the low-yielding currency may gather pace over the near-term as the Bank of Japan (BoJ) increases its effort to achieve the 2 percent target for inflation. Despite speculation of seeing an unlimited QE program in Japan, the central bank temporarily suspended its ‘banknote rule’ as it pledged to purchased JPY 7T in bonds per month and offered to buy longer-term government debt in an effort to stem the downside risks for growth and inflation. As the BoJ introduces a ’quantitative, qualitative’ approach for monetary policy, the central bank’s easing cycle should continue to dampen the appeal of the Yen, but we may see Governor Haruhiko Kuroda take a more aggressive approach in the coming months as he aims to achieve the price growth target in two-years. As the USDJPY carves out a higher low above the 92.50 region, an upward trending channel certainly appears to be taking shape, but the dollar-yen may face range-bound prices ahead of the next meeting on April 26 as recent efforts taken by the BoJ may be insufficient to stem deflation.