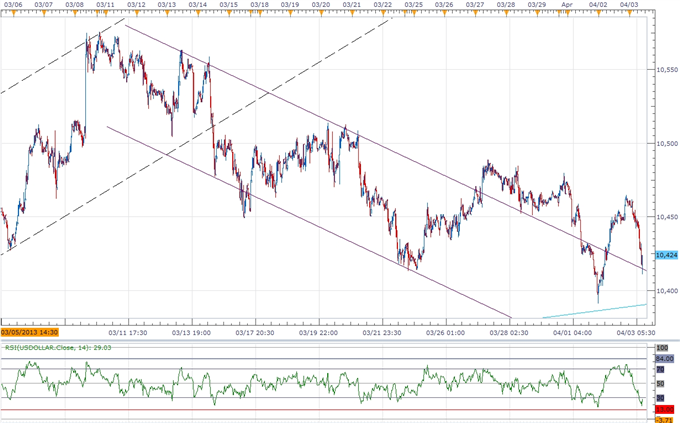 The Dow Jones-FXCM U.S. Dollar Index (Ticker: USDollar) is trading 0.28 percent lower from the open as the ADP Employment report crossed the wires weaker-than-expected, while the ISM Non-Manufacturing index narrowed to 54.4 in March amid forecasts for a 55.5 print. As the data dampens the prospects of seeing an upbeat Non-Farm Payrolls report on Friday, we may see the dollar trade heavy over the remainder of the week, but the greenback remains poised for a short-term rebound as the 30-minute relative strength index approaches support around the 13 figure. As index holds above 10,400, we may see the dollar track sideways ahead of the highly anticipated employment report as the U.S. economy is expected to add another 198K jobs in March. 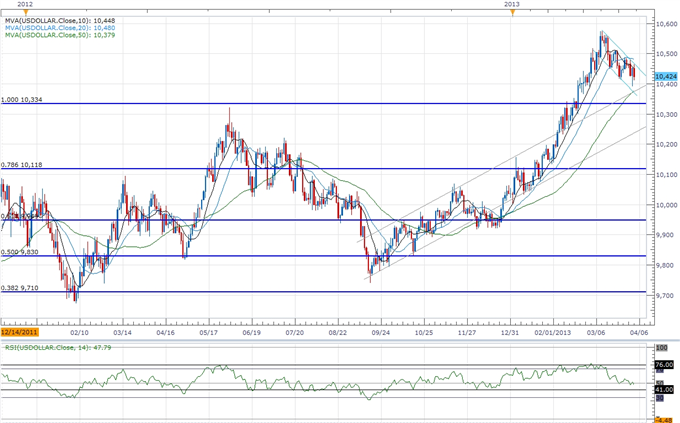 Although Chicago Fed President Charles Evans favors carrying the easing cycle into 2014, Atlanta Fed President Jeffrey Lacker argued that the Fed should scale back its asset purchases this year as the non-standard measures complicates the central bank’s exit strategy. At the same time, FOMC voting member Daniel Tarullo said there needs to be a further improvement in the labor market to scale back on quantitative easing, but we may see a growing number of central bank officials curb their willingness to expand the balance sheet further as the economic recovery gradually gathers pace. As the bullish flag formation continues to take shape, the USDOLLAR appears to be carving out a higher low around the 10,400 region, and we will keep a close eye on the relative strength index as it comes up against interim support around the 41 figure.

The greenback weakened across the board, led by a 0.39 percent rally in the Japanese Yen, but the low-yielding currency is likely to come under pressure over the next 24-hours of trading as market participants anticipate the Bank of Japan (BoJ) to further embark on its easing cycle. Indeed, there’s speculation that new central bank Governor Haruhiko Kuroda will adopt an unlimited quantitative easing program prior to 2014, while there’s bets that the BoJ will also broaden the scope of its asset purchase program in an effort to steer the economy out of recession. However, we may see Mr. Kuroda merely reiterate his dovish pledge for monetary policy at his first interest rate decision, and we may have to wait for the April 26 meeting to see the BoJ introduce additional measures, which could foster further Japanese Yen advances over the near-term.