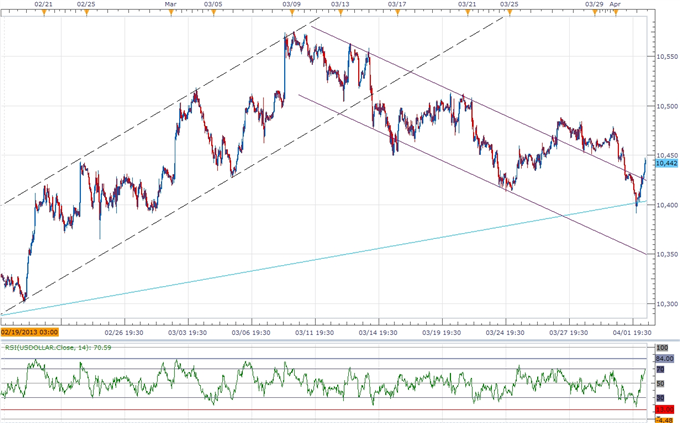 The Dow Jones-FXCM U.S. Dollar Index (Ticker: USDollar) is 0.16 percent higher from the open as Factory Orders in the U.S. increased 3.0 percent during February, which exceeded expectations for a 2.9 percent print, and the greenback may continue to pare the decline from the previous month as the fundamental outlook for the world’s largest economy improves. Although the index pierced below the 10,400 figure, a close above the key pivot would continue to reinforce our bullish outlook for the greenback, but the reserve currency may consolidate over the next 24-hours of trading as the advance appears to be getting overstretched. As the USDOLLAR moves 120 percent of its average true range, we’re seeing the 30-minute relative strength index approach overbought territory, but the slew of central bank rhetoric on tap for later today may prop up the dollar over the remainder of the week as the Federal Reserve drops its dovish tone for monetary policy. 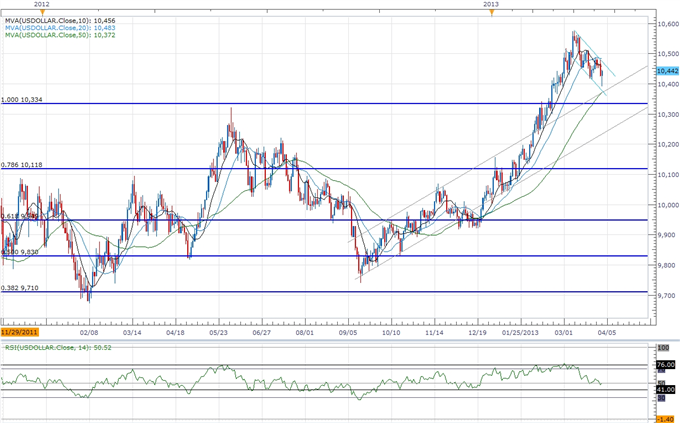 Although the FOMC continues to embark on its $85B/month asset purchase program, we may see a growing number of central bank officials turn increasingly upbeat towards the economy amid the budding recovery in housing along with ongoing improvement in the labor market. As the ADP Employment report is expected to show another 200K rise in private payrolls, the bullish flag formation should continue to take shape in the coming days, and Friday’s Non-Farm Payroll report may serve as the fundamental catalyst to spark a breakout in the index as employment is anticipated to increase another 199K in March.

Three of the four components weakened against the greenback, led by a 0.65 percent decline in the British Pound, while the Australian dollar bucked the trend as the Reserve Bank of Australia (RBA) kept the benchmark interest rate at 3.00 percent in April. Nevertheless, Governor Glenn Stevens left the door open to reduce borrowing costs further as the resource boom comes to an end, and the short-term rebound in the AUDUSD may fail to gather pace as it carves out a lower top just ahead of the 1.0500 region. In turn, we should see the downward trend dating back to 2011 continue to take shape, and the pair may give back the rebound from March (1.0114) as the central bank aims to encourage a more robust recovery in the $1T economy.