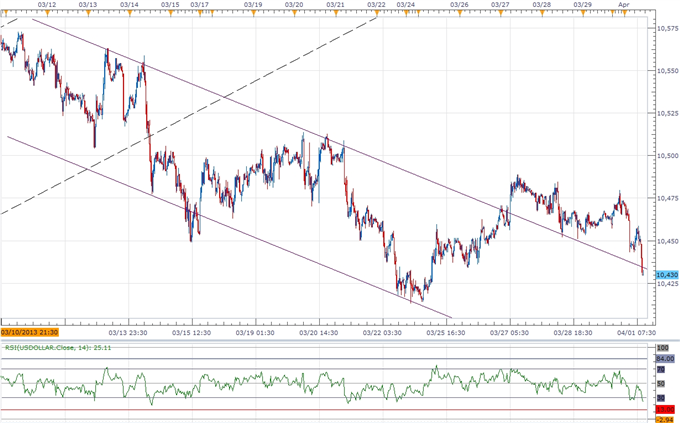 USD to Consolidate Further Ahead of NFPs- AUD to Face RBA

The Dow Jones-FXCM U.S. Dollar Index (Ticker: USDollar) is trading 0.31 percent lower from the open after moving 107 percent of its average true range, and the reserve currency may trade heavy over the next 24-hours of trading as the economic docket showed manufacturing in the world’s largest economy tapering off in March. As the fundamental development warns of a slowing recovery, we may see the greenback struggle to hold above former trendline resistance, but the technical outlook foreshadows a short-term rebound as the 30-minute relative strength index comes up against oversold territory. In turn, we should see the USDOLLAR continue to consolidate above the 10,400 figure, and the reserve currency may regain its footing ahead of the highly anticipated Non-Farm Payrolls report on tap for later this week as the U.S. economy is expected to add another 195K jobs in March. 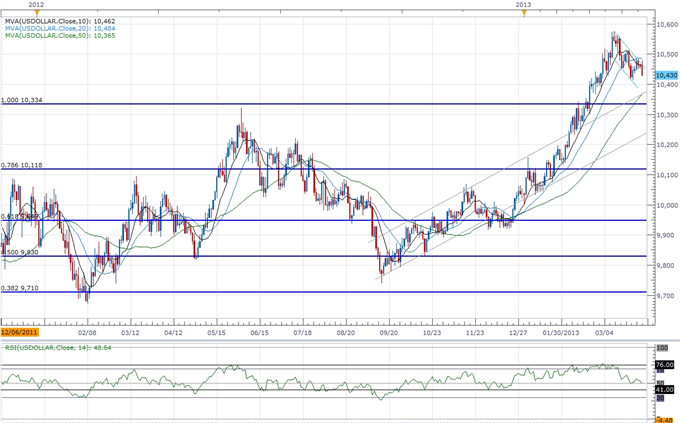 Although the U.S. ISM Manufacturing index crossed the wires at 51.3 in March versus forecasts for a 54.0 print, the employment component advanced to 54.2 from 52.6 the month prior, and we may see NFPs continues to top market expectations as the Federal Reserve maintains its highly accommodative policy stance. As the bullish flag formation continues to take shape, the employment report may serve as the fundamental catalyst to spark another run at the 10,600 region, and we will keep a close eye on the relative strength index as it approaches interim support around the 41 figure. In turn, we may see further dollar weakness over the coming days, but we will preserve a bullish outlook over the near to medium-term as the FOMC drops its dovish tone for monetary policy.

The greenback weakened across the board, led by a 0.97 percent rally in the Japanese Yen, while the Australian dollar added 0.02 percent ahead of the Reserve Bank of Australia (RBA) interest rate decision as the central bank is widely expected to keep the benchmark interest rate at 3.00 percent in April. Despite the bright signs coming out of the $1T economy, we are likely to see RBA Governor Glenn Stevens keep the door open to push the benchmark interest rate to a fresh record-low in order to combat the uneven recovery. As resource boom comes to an end, the central bank may make another attempt to talk down the persistent strength in the Australian dollar, and Mr. Stevens may sound more dovish this time around as the outlook for growth and inflation remains weak. As the AUDUSD struggles to push back above the 61.8 percent Fibonacci retracement from the 2011 high to low around 1.0430, comments suggestive of a rate cut should spark a sharp selloff in the exchange rate, and we will look for a move back towards the 50.0 percent retracement (1.0230) as interest rate expectations falter.