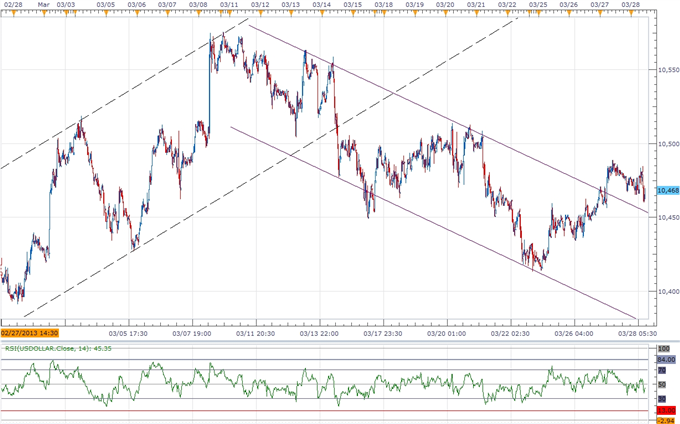 The Dow Jones-FXCM U.S. Dollar Index (Ticker: USDollar) is trading 0.10 percent lower from the open after moving 42 percent of its average true range, but we should see the greenback maintain the range-bound price action carried over from the previous week as market participation thins ahead of the holiday weekend. Nevertheless, as the index breaks out of the downward trending channel from earlier this month, an inverse head-and-shoulders pattern appears to be taking shape, and the rebound from the March low (10,413) may gather pace in the days ahead as the fundamental developments coming out of the U.S. economy highlight an improved outlook for growth. The topside break in the greenback remains constructive as long as we see the index hold above 10,450 region, and the bullish sentiment surrounding the USD should gather pace over the near to medium-term as the Federal Reserve adopts a more neutral to hawkish tone for monetary policy. 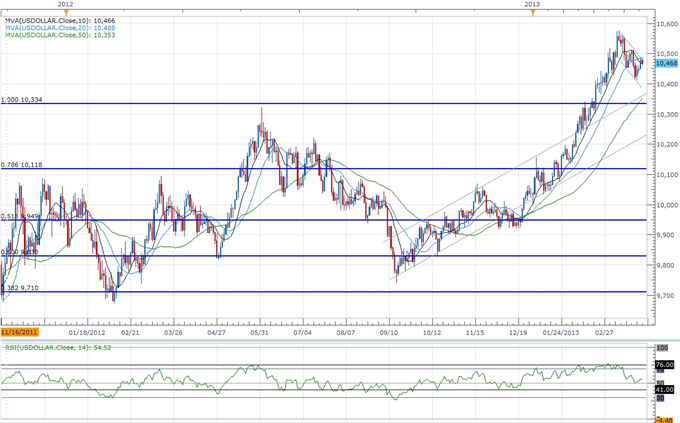 Non-Farm Payrolls highlights the biggest U.S. event risk for the following week, and the labor report may increase the appeal of the reserve currency as employment is expected to increase another 190K in March. Although FOMC voting member Eric Rosengren supported a highly accommodative policy stance for the U.S. economy, the Boston Fed President noted that there’s a lot of excess reserve in the system, and argued that monetary support ‘can be reduced’ as the economic recovery gradually gathers pace. As the outlook for growth and inflation improves, we may see a growing number of central bank officials sound more upbeat in the coming months, and the bullish flag formation may pan out in the week ahead should the slew of data coming out of the world’s largest economy top market expectations.

The greenback weakened against three of the four counterparts, led by a 0.31 percent rally in the Euro, which was followed by a 0.28 percent advance in the Japanese Yen. Indeed, there’s growing speculation that Bank of Japan (BoJ) Governor Haruhiko Kuroda will implement a more aggressive approach in tackling deflation at the April 4 meeting, but we may see the new central bank head stick to the sidelines at his first interest rate decision amid the marked depreciation in the local currency. As the BoJ pledges to achieve the 2 percent target for inflation, the prospects for positive real interest rates in Japan should further dampen the appeal of the Japanese Yen, and the low-yielding currency remains poised to weaken further in 2013 as the central bank continues to embark on its easing cycle.