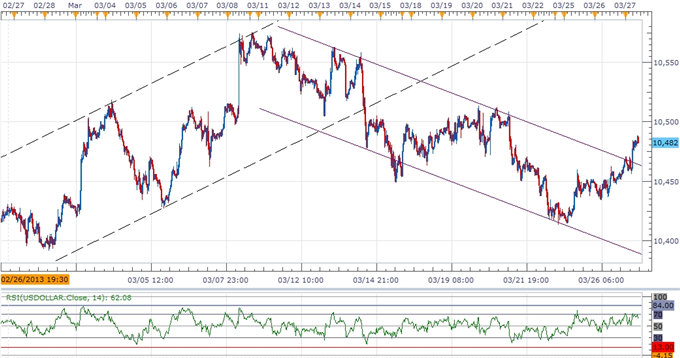 USDOLLAR Poised for Bullish Breakout, AUD Capped Ahead of RBA

The Dow Jones-FXCM U.S. Dollar Index (Ticker: USDollar) is 0.32 percent higher from the open after moving 74 percent of its average true range, and the greenback may continue to retrace the decline from the yearly high (10,576) as it breaks out of the downward trending channel from earlier this month. As the ongoing turmoil in Europe fuels a flight to safety, the upside break in the greenback may gather pace ahead of the holiday weekend, but we will closely watching the 30-minute relative strength index over the next 24-hours of trading as it threatens overbought territory. Nevertheless, the bullish sentiment surrounding the reserve currency may pave the way for a move back above 10,500 as headlines coming out of the euro-area drags on market sentiment, and the greenback may continue to appreciate against its major counterparts as the Federal Reserve drops its dovish tone for monetary policy. 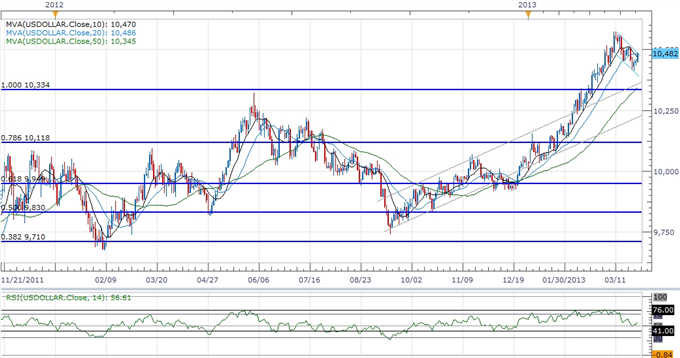 Although U.S. Pending Home sales slipped 0.4 percent in February after climbing a revised 3.8 percent the month prior, Dallas Fed President Richard Fisher said the FOMC should taper its asset purchase program and held a rather upbeat tone for the U.S. economy amid the budding recovery in the housing market along with the resilience in private sector consumption. As we have a slew of Fed officials scheduled to speak later today, including FOMC voting member Eric Rosengren, the fresh batch of central bank rhetoric may pave the way for fresh yearly highs in the USDOLLAR as the Fed appears to be slowly moving away from its easing cycle. As the index works its way back towards 10,500, we may see the bullish flag pattern pan out in the coming days, and the dollar may mark fresh yearly highs over the near-term as the reserve currency benefits from the flight to quality.

Three of the four components weakened against the greenback, led by a 0.73 percent decline in the Euro, while the Australian dollar shed 0.52 percent as market participants scale back their appetite for risk. Although the Reserve Bank of Australia (RBA) is expected to keep the benchmark interest rate at 3.00 percent at the April 1 meeting, Governor Glenn Stevens may show a greater willingness to push borrowing costs to a fresh record-low as the outlook for growth and inflation remains tilted to the downside. In turn, a more dovish tone coming out of the RBA may lead the AUDUSD to give back the rebound from earlier this month (1.0114), and the pair may trade heavy over the near to medium-term as the pair struggles to clear the 1.0500 region.