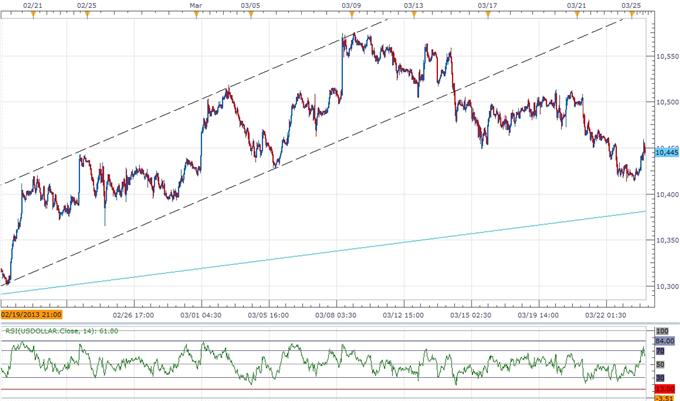 The Dow Jones-FXCM U.S. Dollar Index (Ticker: USDollar) is 0.30 percent higher from the open after moving 84 percent of its average true range, and the bullish sentiment surrounding the greenback may gather pace in the days ahead as the banking crisis in Cyprus rattles investor confidence. As the index bounces back ahead of former trendline resistance, the flight to safety my prop up the reserve currency in the coming days, while the broader fundamentals may help the greenback to retrace the decline from earlier this month as the economic outlook for the U.S. improves. However, as the 30-minute relative strength index pushes into overbought territory, we may see a small pullback over the next 24-hours of trading, and the dollar may continue to carve a short-term base ahead of the 10,400 region as the developments coming out of the world’s largest economy raises the prospects for future growth. 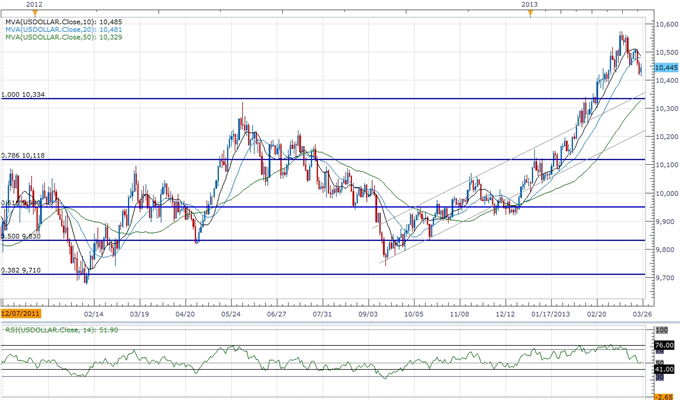 As the economic docket shows a more robust in the U.S., we may see New York Fed President William Dudley, who also serves on the FOMC, turn increasingly upbeat towards the economy, and we may see a growing number of central bank officials adopt a more neutral to hawkish tone for monetary policy as the region gets on a more sustainable path. In turn, a slew of positive developments should produce a move back above the 10,500 region, but the downward trend in the relative strength index may foreshadow further losses for the USDOLLAR as the oscillator approaches interim support around the 41 figure. Nevertheless, we will maintain our bullish outlook for the greenback amid the shift in the policy outlook, and the dollar remains poised to appreciate further over the near to medium-term as the central bank slowly moves away from its easing cycle.

The greenback advanced against two of the four components, led by a 0.76 percent decline in the Euro, and the single currency may weaken further in the days ahead as headlines surrounding the banking crisis in Cyprus drags on market sentiment. Indeed, Euro-group President Jeroen Dijsselbloem said the bailout package for Cyprus would serve as a new template for addressing financial turmoil in the euro-area, and the precedence set by the group may further dampen confidence in the euro-area as policy makers preserve a reactionary approach in addressing the risks surrounding the region. As the periphery countries struggle to get their house in order, we are likely to see the governments operating under the single currency become increasingly reliant on monetary support, and the EURUSD may struggle to maintain the range-bound price action carried over from the previous week as the fundamental outlook for Europe turns increasingly bleak. As the EURUSD remains capped by the 38.2 percent Fibonacci retracement from the 2009 high to the 2010 low around 1.3120, we are still looking for a move back towards the 23.6 retracement (1.2640-50), but we would like to see a close below the 200-Day SMA (1.2873) to confirm our bearish forecast for the pair.