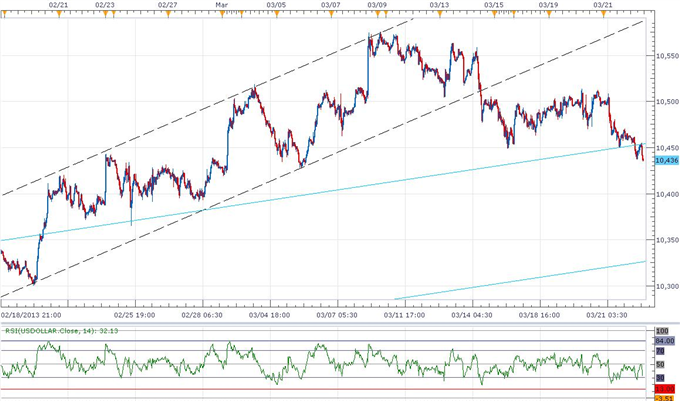 USD Searches for Support Ahead of Fed Rhetoric, GDP Revision

The Dow Jones-FXCM U.S. Dollar Index (Ticker: USDollar) is trading 0.25 percent lower from the open after trading 62 percent of its average true range, and the greenback may work its way below the 10,400 region to test for trendline support. A look at the 30-minute relative strength index suggests further dollar weakness until the oscillator breaks back above the 50 figure, and a head-and-shoulders formation appears to be taking shape, which calls for further USD weakness in the coming days. However, as the economic docket is expected to show a more broad-based recovery in the U.S., a slew of positive developments may produce one last run at 10,600, and we may see a growing number of Fed officials adopt a more neutral to hawkish tone for monetary policy as the central bank looks to scale back its easing cycle. 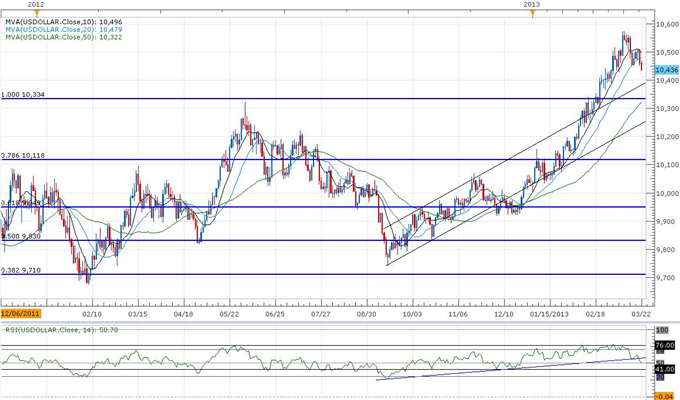 While demands for U.S. Durable Goods are expected to increase 3.9% in February, the final 4Q GDP reading is expected to show a 0.5% rate of growth amid an initial forecast for a 0.1% rise, and the upward revision may renew the bullish sentiment for the greenback as the recovery in the world’s largest economy gradually gathers pace. With Fed Chairman Ben Bernanke, FOMC voting members William Dudley and Eric Rosengren scheduled to speak next week, a more upbeat tone from the group may suggest that the FOMC will conclude its easing cycle later this year, and the central bank may start to lay out a tentative exit strategy in the coming months as growth and inflation picks up. Although we’re watching a potential head-and-shoulders top in the index, we’ll be keeping a close eye on the relative strength index as support lies around the 39 figure, and the dollar may face a small correction amid the shift in the policy outlook.

Once again, three of the four components gained ground against the greenback, led by a 0.67 percent rally in the Euro, with the single currency threatening the 1.3000 figure as policy makers in Cyprus rush to secure the EUR 10.0 bailout. Indeed, there’s headlines suggesting that the government will announce a new plan to draw up the EUR 5.8B contribution, but the lingering threat of a bank-run in the periphery country may produce large gaps at the Sunday open as European policy makers maintain a reactionary approach in tackling the banking crisis. As the EURUSD breaks out of the range from earlier this week, the pair looks poised for a close above 1.3000, and we may see another run at the 38.2 percent Fibonacci retracement from the 2009 high to the 2010 low around 1.3120 as the EU works on a short-term resolution for Cyprus.