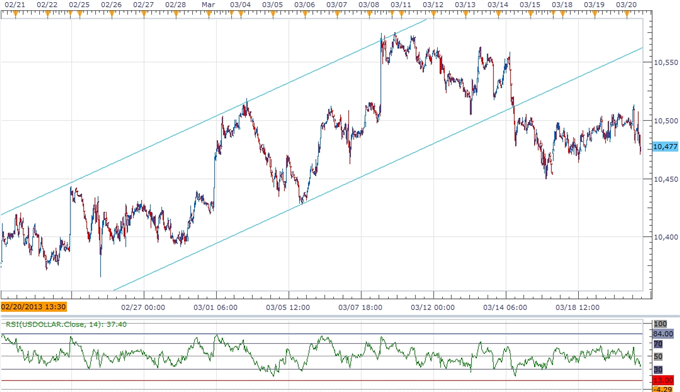 USDOLLAR to Eye Fresh Highs on FOMC Policy- 10,600 in Focus

Although the Dow Jones-FXCM U.S. Dollar Index (Ticker: USDollar) is trading 0.16 percent lower from the open, we’re seeing the greenback maintain the range from earlier this week, and the reserve currency may have set a higher low around the 10,450 figure as we anticipate the Federal Reserve to strike an improved outlook for the world’s largest economy. Nevertheless, we should see the dollar consolidate going into the FOMC interest rate decisionas the 30-minute relative strength index approaches oversold territory, and will look to buy dips in the greenback as the central bank drops its dovish tone for monetary policy. In turn, we may see the USDOLLAR make another run at the 10,600 figure, and the bullish sentiment surrounding the reserve currency should gather pace as the economic recovery in the U.S. gradually gathers pace. 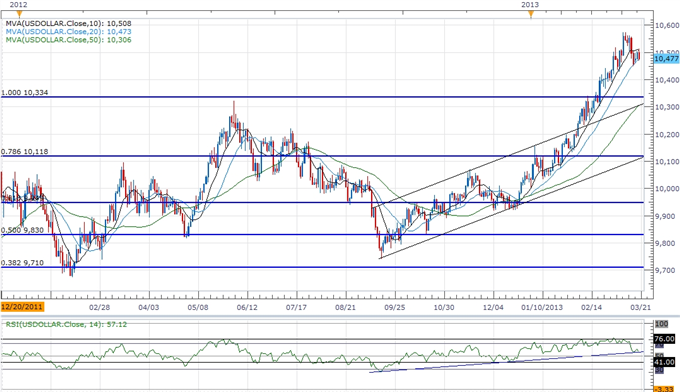 As the USDOLLAR threatens the 20-Day SMA (10,473), a break and a close below the moving average would dampen our bullish forecast for the greenback, but the upward trend in the relative strength index may pave the way for another run up in the index as we anticipate the Fed to sound more upbeat this time around. Beyond the interest rate decision, the policy statement accompanying the meeting may continue to talk down bets for more quantitative easing, and the central bank’s updated forecast may reflect a stronger recovery for 2013 amid the resilience in private sector consumption along with the pickup in the housing market. In turn, we may see a growing number of Fed officials scale back their willingness to expand the balance sheet further, and the committee may start to discuss a tentative exit strategy over the coming months as the economy gets on a more sustainable path. As a result, the USDOLLAR may push to fresh highs over the remainder of the week, and we should see the FOMC turn increasingly hawkish this year as the outlook for growth and inflation improves.

The greenback weakened against three of the four components, led by a 0.54 percent advance in the Euro, while the Japanese Yen bucked the trend and slipped 0.32 percent against its U.S. counterpart. As Haruhiko Kuroda takes the helm of the Bank of Japan, there’s growing speculation that the central bank will announce further measures to shore up the ailing economy at the April 4 meeting, but new governor may stick to the current policy amid the marked depreciation in the local currency. In turn, the rate decision scheduled for April 26 may carry greater importance for the Japanese Yen as Mr. Kuroda pledges to achieve the 2 percent target for inflation, and the Yen remains poised to weaken further over the course of the year as the central bank continues to embark on its easing cycle.