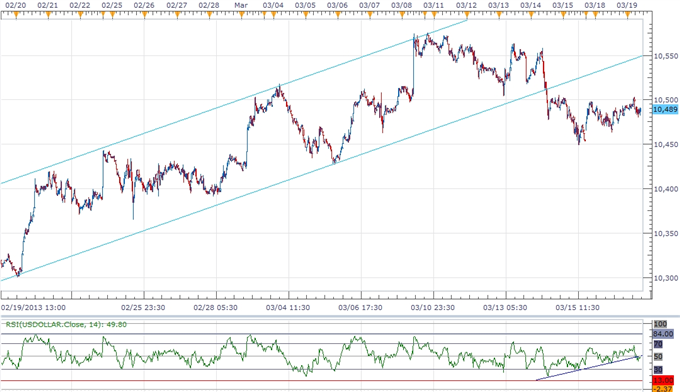 USD to Rally on FOMC Policy- JPY Weakness to Accelerate

The Dow Jones-FXCM U.S. Dollar Index (Ticker: USDollar) remains 0.10 percent higher on the day after falling back from a high of 10,503, and the greenback may consolidate over the next 24-hours of trading as market participants turn their attention to the FOMC interest rate decision along with the updated forecasts from the central bank. As the 30-minute relative strength index fails to maintain the upward trend from earlier this month, we may see the index revert back towards the 10,450 region, but the bullish sentiment surrounding the reverse currency may gather pace should the central bank turn increasingly upbeat towards the economy. In turn, we may see the USDOLLAR carve out a short-term base going into the interest rate decision, and the fresh batch of central bank rhetoric may spark another rally in the greenback as a growing number of Fed officials scale back their willingness to expand the balance sheet further. 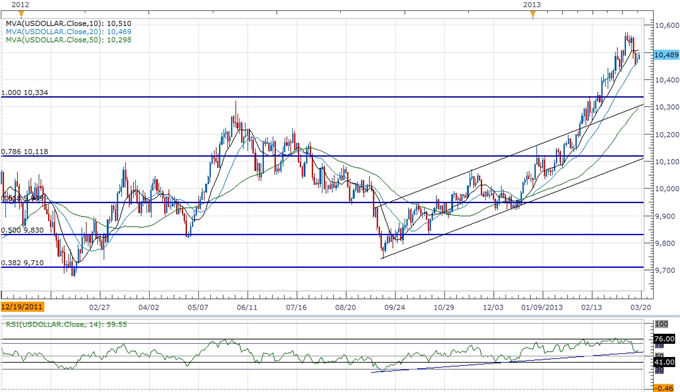 As the relative strength index on the daily chart preserves the upward trend dating back to September, the dollar appears to be coiling up for another run at the 10,600 figure, and the Fed’s updated forecast may highlight a improved outlook for 2013 amid the resilience in private sector consumption along with the budding recovery in the housing market. Indeed, the FOMC may look to scale back its asset purchase program as the economy gets on a more sustainable path, and the committee may start to draw up a tentative exit strategy over the coming months as growth and inflation picks up. As the USDOLLAR continues to bounce off of the 20-Day SMA (10,468), a more hawkish statement should favor our bullish forecast for the greenback, and the reserve currency may gain ground throughout the year amid the shift in the policy.

Three of the four components weakened against the greenback, led by a 0.24 percent decline in the Australian dollar, while the Japanese Yen slipped 0.13 percent as Bank of Japan Governor Masaaki Shirakawa leaves the central bank. During his final press conference as the central bank head, Mr. Shirakawa warned that the depreciation in the Yen is not indicative of stronger fundamentals and argued that BoJ remains at risk of losing its independence, which would ultimately dampen the appeal of the low-yielding currency. As the new government puts increased pressure on the central bank to achieve the 2 percent target for inflation, we should see the BoJ carry out its easing cycle throughout 2013, and the Yen remains poised to weaken further over the near to medium-term as the central bank pledges to stem deflation.