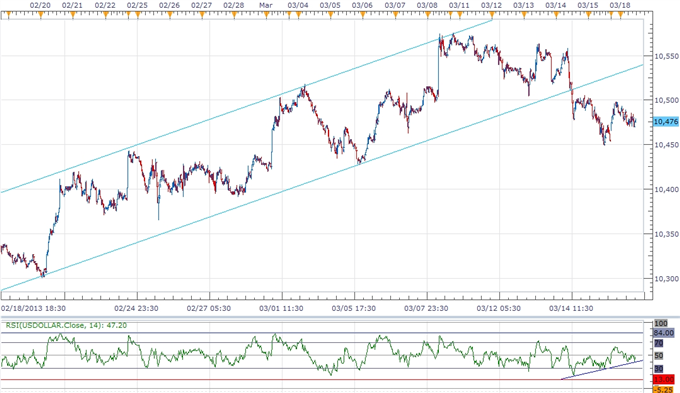 The Dow Jones-FXCM U.S. Dollar Index (Ticker: USDollar) remains 0.21 percent higher from the open after holding Friday’s range, and the greenback may consolidate going into the FOMC’s two-day meeting as the central bank is scheduled to release its updated forecast for the world’s largest economy, and we may see the greenback carve out a higher lower ahead of the rate decision as the central bank highlights a more broad-based recovery in the world’s largest economy. The upward trend in the 30-minute relative strength index may ultimately pave the way for a fresh yearly high in the index as the fundamental developments coming out of the U.S. raise the outlook for growth and inflation, but we may see another move towards the 10,450 figure as the USDOLLAR as yet to fill-in the gap from the Sunday open. Nevertheless, we are looking for further advances in the reserve currency as the Fed takes note of the more broad-based recovery in the U.S., and the bullish sentiment surrounding the greenback should gather pace throughout 2013 as the central bank drops its dovish tone for monetary policy. 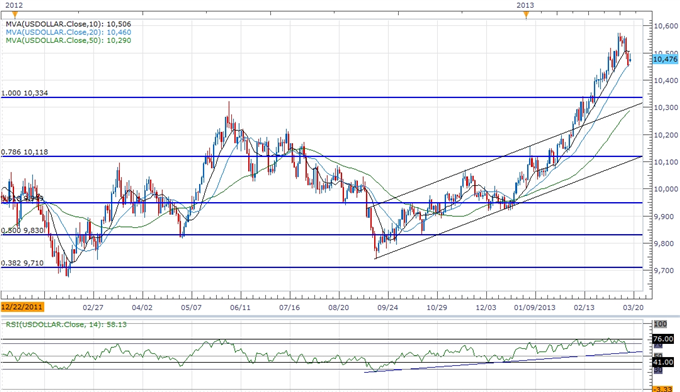 Although the FOMC is widely expected to maintain its highly accommodative policy stance in March, we may see a growing number of central bank officials start to lay out a tentative exit strategy economic recovery gradually gathers pace. At the same time, Fed Chairman Ben Bernanke may scale back his willingness to expand the balance sheet further amid the resilience in private sector consumption along with the budding recovery in the housing market, and the fresh batch of central bank rhetoric may trigger another run at the 10,600 figure as the central bank becomes more upbeat towards the economy. In turn, we will maintain our bullish forecast for the USDOLLAR, but we will be keeping a close eye on the relative strength index as the oscillator threatens the upward trend dating back to September.

The greenback advanced against two of the four components, led by a 0.96 percent decline in the Euro, while the Australian dollar shed 0.16 percent as the AUDUSD gapped lower during the Sunday open. As the Reserve Bank of Australia (RBA) meeting minutes come into focus, we should see the central bank keep the door open to push the benchmark interest rate to a fresh record-low, but Governor Glenn Stevens may sound more dovish this time around as the heightening threat for an asset bubble in China – Australia’s largest trading partner – dampens the outlook for the $1T economy. As Australia faces an uneven recovery, Mr. Stevens may sound more dovish this time around, and the AUDUSD could be carving a lower top ahead of the 61.8 percent Fibonacci retracement from the 2011 high to low around 1.0430 as the relative strength index finds interim resistance around the 59 figure.