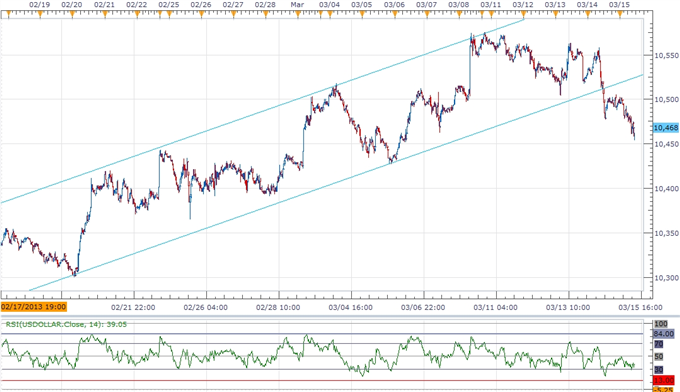 USD Correction in Play Ahead of FOMC- JPY Rebound to Fizzle

The Dow Jones-FXCM U.S. Dollar Index (Ticker: USDollar) remains 0.30 percent lower from the open after tagging a low of 10,462, and the pullback from the March high (10,576) should turn into a larger correction as the greenback fails to maintain the upward trending channel carried over from earlier this year. In turn, we may see the reserve currency fall back towards the 10,400 figure to test for psychological support, but the dollar may consolidate throughout the North American trade as the 30-minute relative strength index comes up against oversold territory. Nevertheless, as the FOMC interest rate decision highlights the biggest event risk for the following week, the fresh batch of central bank rhetoric paired with the updated forecast may instill an improved outlook for the world’s largest economy, and we may see a growing number of Fed officials scale back their willingness to expand the balance sheet further as the recovery gradually gathers pace. 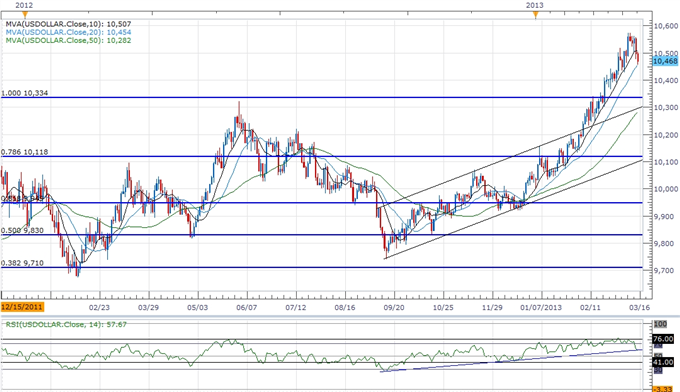 Although the U. of Michigan Confidence survey fell short of market expectations, the larger-than-expected uptick in the headline reading for inflation may encourage the FOMC to adopt a more hawkish tone for monetary policy as the U.S. economy gets on a more sustainable path. As growth and inflation picks up, the central bank remains poised to switch gears later this year, and we may see the Fed raise its fundamental assessment for the U.S. amid the resilience in private sector consumption along with the budding recovery in the housing market. However, as the relative strength index threatens the upward trend carried over from the previous year, we may see a more meaningful reversal in the days ahead, and we will look for a lower high in the index as the bullish sentiment surrounding the reserve currency gathers pace.

Three of the four components strengthened against the greenback, led by a 0.67 percent advance in the Japanese Yen, but the rebound in the low-yielding currency may be short-lived as Haruhiko Kuroda is set to take the helm at the Bank of Japan (BoJ). Indeed, the new central bank head is expected to take a more aggressive approach in achieve the 2 percent target for inflation as Prime Minister Shinzo Abe pledges to shore up the ailing economy, but we may see the BoJ’s independence come under increased pressure as the government plays an increased role in dictating monetary policy. Indeed, BoJ Governor Masaaki Shirakawa warned that actions by other entities are needed to tackle deflation, but the shift in public policy should continue to dampen the appeal of the Japanese Yen as the central bank remains poised to carry its easing cycle into the following year. In turn, we will maintain our game plan to buy dips in the USDJPY, and the pair looks poised to track higher throughout the year amid the deviation in the policy outlook.