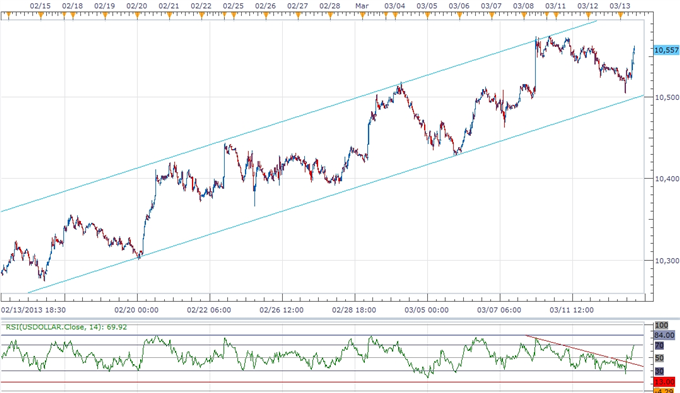 The Dow Jones-FXCM U.S. Dollar Index (Ticker: USDollar) is paring the decline from earlier this week and is trading 0.21 percent higher on the day amid the positive developments coming out of the world’s largest economy. As the reserve currency carves out a higher low just ahead of the 10,500 region, the index looks poised for a higher high, and we may see the dollar make another run at the 10,600 figure as the 30-minute relative strength index breaks the bearish trend from the previous week. Nevertheless, we may see a short-term pullback going into the EU Summit as the RSI pushes into overbought territory, but the bullish sentiment surrounding the reserve currency should gather pace throughout the remainder of the month as the as the upward trending channel carried over from the previous month remains intact. 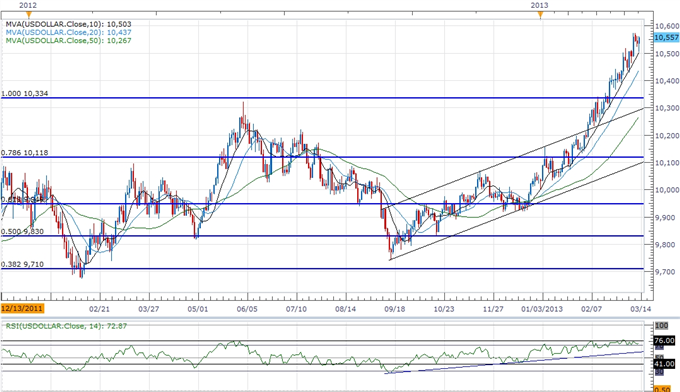 Indeed, the U.S. Advance Retail Salespropped up the dollar amid the larger-than-expected expansion in consumer spending, and we should see the FOMC continue to change its tune over the coming months amid the resilience in private sector consumption. Although the Fed is widely expected to maintain its current policy at the meeting on tap for the following week, we may see a growing number of central bank officials show a greater willingness to scale back on quantitative easing, and the committee remains poised to slowly move away from its easing cycle as the U.S. economy gets on a more sustainable path. Nevertheless, as the RSI on the USDOLLAR continues to trade in overbought territory, we may see a fresh yearly high head going into the FOMC interest rate decision, and will need to see the oscillator close below the 70 figure to see a more meaningful correction in the exchange rate.

Two of the four components weakened against the greenback, led by a 0.76 percent decline in the Euro, while the Australian dollar shed 0.26 percent. However, as the $1T economy is expected to add another 10.0K jobs in February, a positive print may prop up the higher-yielding currency over the next 24-hours of trading, but we may see a deterioration in consumer inflation expectations as the region faces a slowing recovery. In turn, the Reserve Bank of Australia (RBA) Minutes due out next week may sound more dovish this time around, and we will maintain a bearish outlook for the AUDUSD as the downward trend dating back to 2011 continues to take shape.