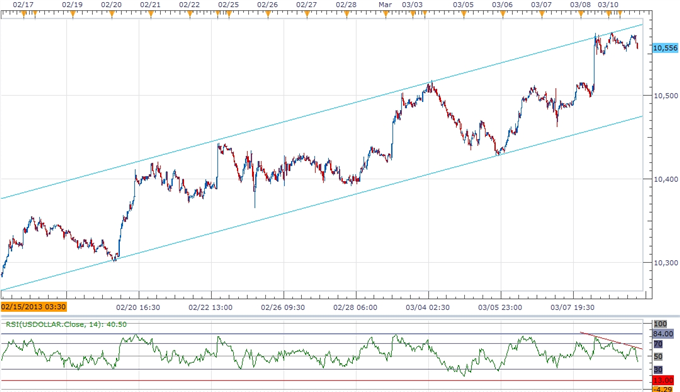 The Dow Jones-FXCM U.S. Dollar Index (Ticker: USDollar) remains 0.13 percent lower on the day after moving 74 percent of its average true range, and the greenback may work its way back towards the 10,500 region as the 30-minute relatives strength index preserves the downward trend carried over from the previous week. As the economic docket remains light for the North American trade, the index should continue to consolidate within the upward trend channel from earlier this year, but we will continue to look for opportunities to buy the dollar as the fundamental outlook for the world’s largest economy improves. In turn, we will wait for the RSI to breakout of the bearish trend to see further advances in the reserve currency, and the dollar may make another run at the 10,600 figure as the economic recovery gradually gathers pace. 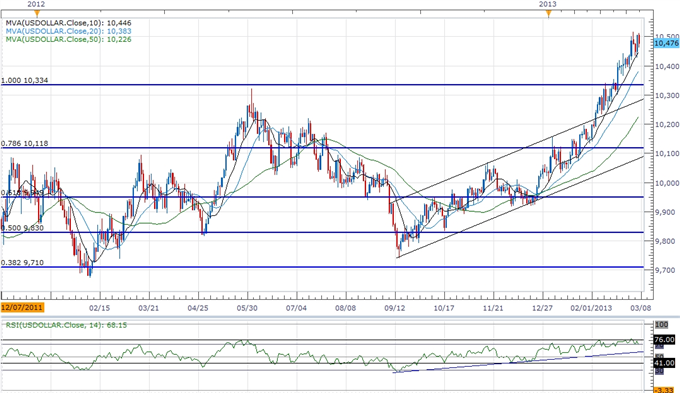 Indeed, U.S. Advance Retail Sales are projected to increase another 0.5 percent in February after expanding 0.1 percent the month prior, and the pickup in household spending may prop up the dollar over the next 24-hours of trading as it raises the outlook for growth. As the FOMC takes note of the resilience in private sector consumption, a positive development should encourage the central bank to adopt a more neutral to hawkish tone for monetary policy, and we anticipate the Fed to switch gears later this year amid the more broad-based recovery in the world’s largest economy. As the daily relatives strength index continues to trade in overbought territory, we will need to see a break and close below 70 for a more meaningful correction, and the fundamental developments coming out of the U.S. may continue to prop up the dollar in the days ahead as the recovery gradually gathers pace.

The greenback weakened against two of the four components, led by a 0.51 percent rally in the Australian dollar, while the Japanese Yen advanced 0.41 percent amid reports that Japan’s opposition party – the Democratic Party of Japan – will oppose Kikuo Iwata’s nomination to be the deputy governor for the Bank of Japan. As the new government takes a more aggressive approach in tackling deflation and looks to have a greater influence over the central bank, we may see the BoJ struggle to maintain independence as Haruhiko Kuroda is expected to take the helm, and the shift in leadership could continue to dampen the appeal of the Japanese Yen as the new central bank governor pledges to achieve the 2 percent target for inflation. In turn, we will maintain our bearish forecast for the low-yielding currency, and will look to buy dips in the USDJPY amid the deviation in the policy outlook.