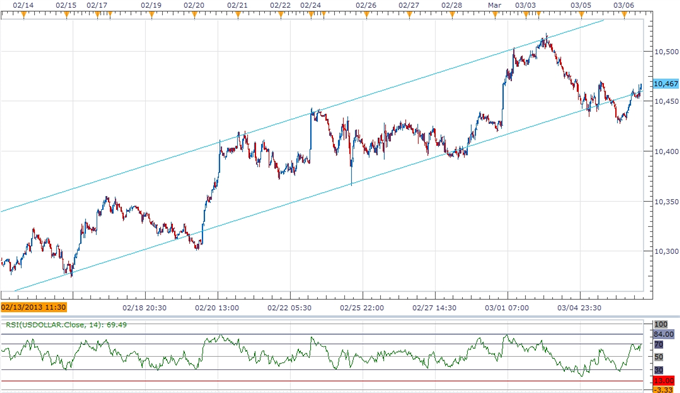 The Dow Jones-FXCM U.S. Dollar Index (Ticker: USDollar) is 0.13 percent higher from the open as the ADP employment report encouraged an improved outlook for the labor market, and the greenback may continue to track higher ahead of the Non-Farm Payrolls report on tap for Friday should the Fed’s Beige Book highlight a more broad-based recovery in the U.S. economy. As the index climbs back into the upward trending channel carried over from the previous month, we may see a move back towards the 10,500 figure, but we will need to keep a close eye on the 30-minute relative strength index as it flirts with overbought territory. Nevertheless, we should see the bullish sentiment surrounding the dollar gather pace as the Federal Reserve drops its dovish tone for monetary policy, and we may see the central bank officials start to lay out a tentative exit strategy in the coming months as the region gets on a more sustainable path. 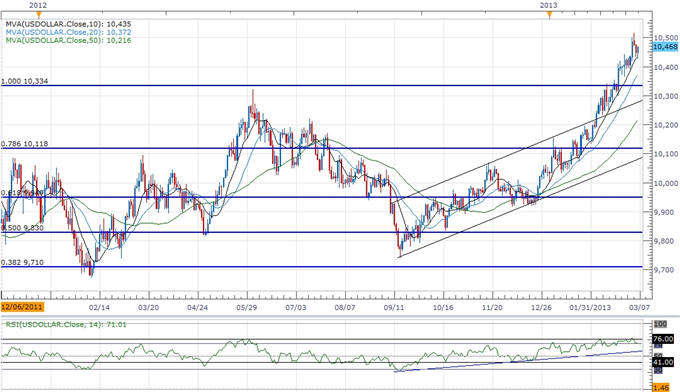 Philadelphia Fed President Charles Plosser argued that the FOMC should start scaling back on quantitative easing in order to halt the non-standard measure by the end of the year, and encouraged the committee to adopt a neutral policy stance as the ongoing expansion in the balance sheet complicates the Fed’s exit strategy. As Mr. Plosser warns that too much is expected from monetary policy, we may see a growing number of central bank officials scale back their willingness to further embark on the easing cycle as the outlook for growth and inflation picks up. As the daily relative strength index continues to trade in overbought territory, a slew of positive developments may produce a fresh yearly high in the dollar, but we are still looking for a short-term correction in order to buy into the greenback. In turn, we will be looking for a close below the 10-Day SMA (10,434) to signal a more meaningful pullback in the index, but we will maintain our bullish bias for the reserve currency amid the shift in the policy outlook.

Three of the four components weakened against the greenback, led by a 0.40 percent decline in the British Pound, while the Australian dollar bucked the trend and rallied 0.17 percent against its U.S. counterpart as the $1T economy grew 0.6% in the fourth-quarter. Nevertheless, as we’re expecting to see Australia’s trade deficit widen in January, a dismal development may dampen the appeal of the higher-yielding currency, and we will maintain our bearish forecast for the AUDUSD as the Reserve Bank of Australia (RBA) keeps the door open to push the benchmark interest rate to a fresh record-low. As the relative strength index on the aussie-dollar finds interim resistance around the 47 figure, we may see the rebound from 1.0114 taper off over the remainder of the week, and the pair remains poised to weaken further over the near to medium-term as the RBA continues to embark on its easing cycle.