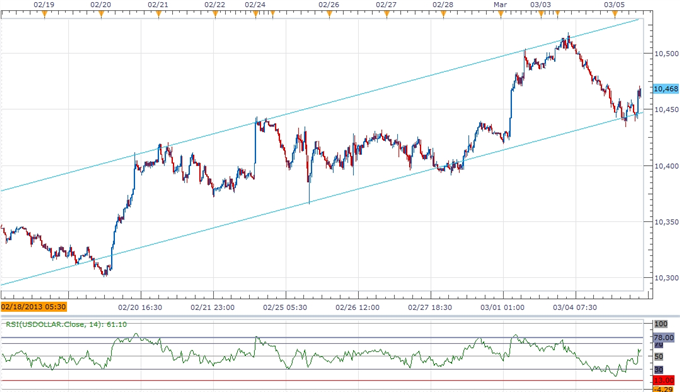 Although the Dow Jones-FXCM U.S. Dollar Index (Ticker: USDollar) is trading 0.13 percent lower from the open, the greenback is paring the decline to 10,435 as the ISM Non-Manufacturing report showed service-based activity in the U.S. expanding at a faster pace during February. As the USDOLLAR comes off of trendline support, we may see the index track higher going into the Fed’s Beige Book on tap for Wednesday, but we will keep a close eye on the 30-minute relative strength index as it works its way back towards overbought territory. Nevertheless, the central bank survey may heighten the bullish sentiment surrounding the dollar as the economic recovery gradually gathers pace, and the reserve currency may firm up going into the highly anticipated Non-Farm Payrolls report as the U.S. is expected to add another 160K jobs in February. 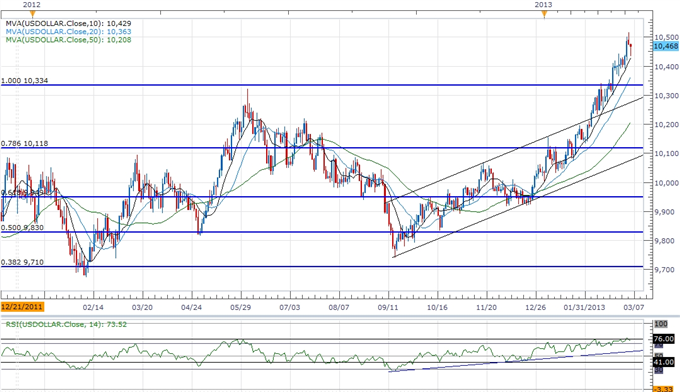 As the FOMC preserves its highly accommodative policy stance, former Fed Chairman Paul Volcker argued that the central bank faces a ‘real challenge’ in implementing the appropriate policy at the right time, and warned that ‘there is a lot of liquor out there now’ as the committee continues to utilize its non-standard measures. As the U.S. gets on a more sustainable path, the Fed may come under increased pressure to start normalizing monetary policy, and we should see the central bank slowly move away from its easing cycle over the coming months as the outlook for growth and inflation improves. Beyond the fundamentals, we’re still looking for short-term pullback as the relative strength index remains stuck in overbought territory, but we may see a shallow correction as the shift in policy outlook instills a bullish forecast for the USD.

The greenback weakened against two of the four components, led by a 0.30 percent rally in the Australian dollar, while the Japanese Yen gained 0.06 percent as the Bank of Japan (BoJ) is widely expected to preserve its current policy in March. As Governor Masaaki Shirakawa departs on March 19, the new head - Haruhiko Kuroda – pledged to take the necessary steps to bring the 15 years of deflation to an end, and we may see the BOJ take a more aggressive approach in addressing the downside risks surrounding the region as the board looks to achieve the 2 percent target for inflation. In turn, we will maintain our bearish outlook for the Japanese Yen, and our game plan is to buy dips in the USDJPY amid the deviation in the policy outlook.