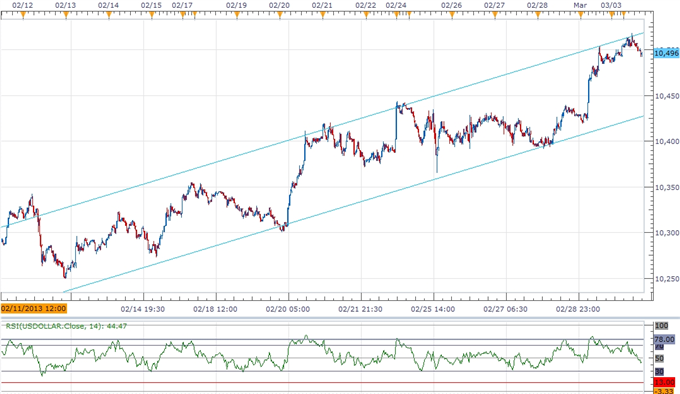 Although the Dow Jones-FXCM U.S. Dollar Index (Ticker: USDollar) remains 0.06 percent higher from the open, the greenback remains poised for a near-term correction as price action comes off of trendline resistance. As the 30-minute relatives strength index falls back from overbought territory, we should see a more pronounced decline over the next 24-hours of trading, but the reserve currency should regain its footing following the Fed’s Beige Book on tap for later this week as the central bank survey is expected to highlight a more broad-based recovery in the U.S. economy. As a result, we will continue to look for opportunities to buy dips in the dollar, and will maintain our bullish forecast for the greenback as the upward trending channel carried over from the previous month continues to take shape. 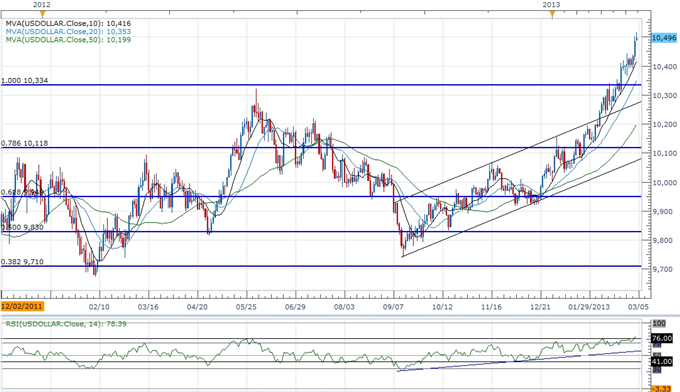 Indeed, Fed Chairman Ben Bernanke defended the Zero-Interest Rate Policy (ZIRP) and warned that ‘premature rate increases would carry a high risk of short-circuiting the recovery, possibly leading -- ironically enough -- to an even longer period of low long-term rates,’ and argued that ‘only a strong economy can deliver persistently high real returns to savers and investors’ as the central bank maintains a highly accommodative stance. In addition, Fed Vice-Chairman Janet Yellen stated that the ‘committee has made very clear that it intends to hold on its balance sheet all the assets we acquire in this purchase program until after we begin raising the federal funds rate’ in an effort to promote a sustainable recovery, but we may see a growing number of central bank officials scale back their willingness to expand the balance sheet further amid the budding recovery in the housing market along with the resilience in private sector consumption. As the relative strength index falls back from a high 78, we should see a more meaningful reversal in the days ahead, but the shift in central bank rhetoric may continue to prop up the reserve currency as the FOMC appears to be slowly moving away from its easing cycle. In turn, the USDOLLAR may face a very shallow correction, and we will look for further U.S. dollar advances over the near to medium-term as the fundamentals improve.

Two of the four components weakened against the greenback, led by a 0.53 percent decline in the Australian dollar, and the high-yielding currency may come under increased pressure over the next 24-hours of trading as the Reserve Bank of Australia (RBA) keeps the door open to lower borrowing costs further. Although the RBA is widely expected to keep the benchmark interest rate at 3.00%, Governor Glenn Stevens may sound more dovish this time around as the $1T economy faces a slowing recovery. According to Credit Suisse overnight index swaps, market participants now see the RBA lowering the cash rate by 50bp over the next 12-months, and the recent weakness in the AUDUSD should gather pace over the near to medium-term as interest rate expectations surrounding the RBA deteriorate.