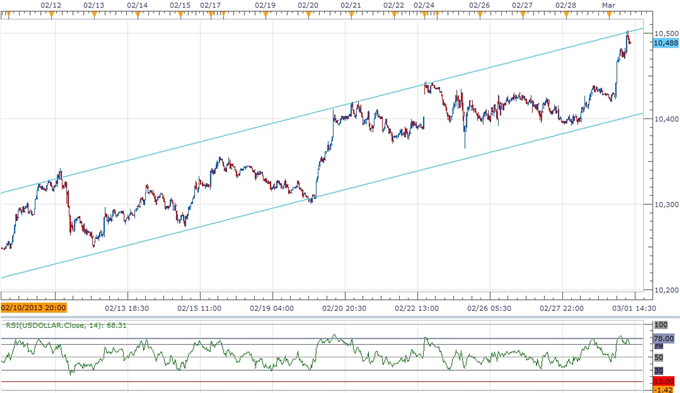 USD to Consolidate Ahead of NFPs, JPY Outlook Weighed by BoJ

The Dow Jones-FXCM U.S. Dollar Index (Ticker: USDollar) its trading a whopping 0.50 percent higher from the open following the slew of positive developments coming out of the world’s largest economy, and the bullish sentiment surrounding the reserve currency should gather pace in March amid the shift in the policy outlook. Nevertheless, we’re still looking for a near-term correction in the dollar as the 30-minute relative strength persistently shoots into oversold territory, and we may see the greenback consolidate ahead of the highly anticipated Non-Farm Payrolls report on tap for next week as the index comes up against trendline resistance. In turn, a short-term pullback in the USDOLLAR may provide a buying opportunity in the week ahead, and we should see the upward trending channel carried over from the previous month continue to take shape as the fundamental outlook for the world’s largest economy improves. 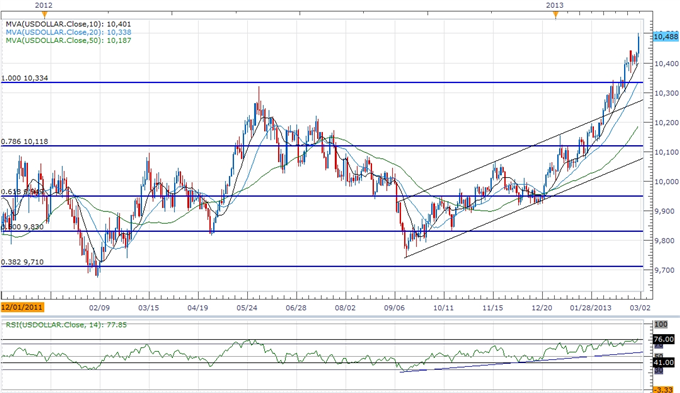 Although the sequester is expected to reduce the growth rate by 0.6 percent, the resilience in private sector consumption along with the budding recovery in the housing market may encourage the Fed to adopt a more hawkish tone for monetary policy. Nevertheless, Chicago Fed President Charles Evans, who serves on the FOMC this year, argued that the committee should not ‘undermine our own policies and remove accommodation prematurely’ amid the ongoing slack in the real economy, but we may see a growing number of central bank officials scale back their willingness to expand the balance sheet further as the economic recovery gradually gathers pace. As the relative strength index threatens resistance (76), the USDOLLAR may have put in a near-term top around the 10,500 figure, and we should see the greenback carve a higher low over the near to medium-term as the upward trend continues to take shape.

The greenback rallied across the board, led by a 0.87 percent decline in the British Pound, which was followed by a 0.86 percent decline in the Japanese Yen. Indeed, the low-yielding currency may struggle to hold its ground going into the Bank of Japan (BoJ) interest rate decision on March 7, but we may see the central bank stick to the sidelines as Governor Masaaki Shirakawa is scheduled to leave the held later this month. Nevertheless, as Japanese policy makers are scheduled to hold the confirmation hearing for Asian Development Bank President Haruhiko Kuroda, speculation for more monetary easing is likely to dampen the appeal of the Japanese Yen, and we may see the bullish flag pattern on the USDJPY pan out next week should a growing number of central bank officials show a greater willingness to expand the balance sheet further.