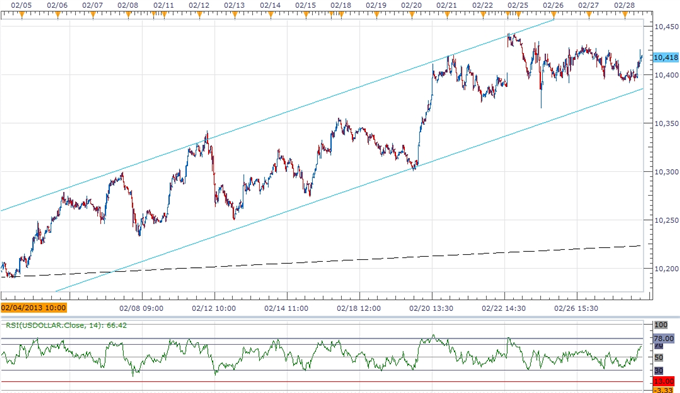 USD Carving Top Ahead of Sequester, JPY at Risk Amid Deflation

The Dow Jones-FXCM U.S. Dollar Index (Ticker: USDollar) is trading 0.08 percent higher from the open after moving 56 percent of its average true range, and the reserve currency may track higher over the remainder of the week as the upward trending channel from earlier this month continues to take shape. As the dollar bounces ahead of trendline support, we may see the index make another run at the 10,450 figure, but we may see the reserve currency consolidate over the next 24-hours of trading as the sequester takes center stage. Indeed, the International Monetary Fund (IMF) warned that it would ‘reevaluate’ its fundamental assessment for the U.S. economy as the $85 cut in public spending dampens the outlook for growth, and we may see a more meaningful correction in the USDOLLAR as it fuels speculation for additional monetary support. We will be keeping a close eye on the 30-minute relative strength index as it approaches overbought territory, but the bullish sentiment surrounding the greenback may gather pace in March as the FOMC continues to scale back its dovish tone for monetary policy. 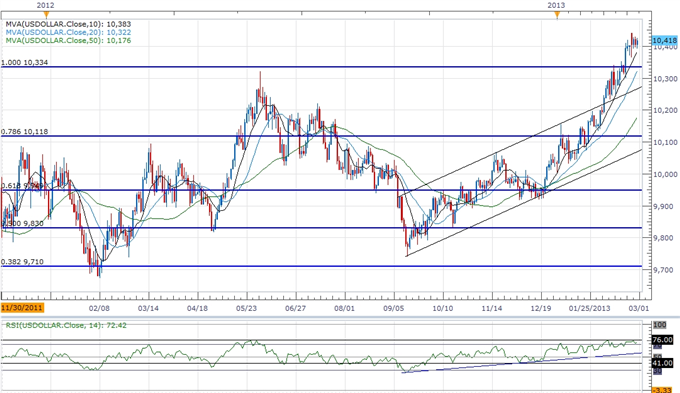 Although Atlanta Fed President Dennis Lockhart argued that the zero-interest rate policy (ZIRP) will persist for ‘some time,’ Dallas Fed President Richard Fisher warned that the central bank is ‘running the risk of overkill’ as the committee continues to embark on quantitative easing. In turn, Mr. Fisher said that the FOMC should ‘taper the dose of QE so that markets can adjust gradually to the eventual removal of this treatment,’ and we may see a growing number of Fed officials scale back their willingness to expand the balance sheet further as the world’s largest economy gets on a more sustainable path. At the same time, a report by the New York Fed showed household debt increasing 0.3 percent in the fourth-quarter amid the highly accommodative policy stance, and we should see the central bank slowly move away from its easing cycle as the economic recovery gradually gathers pace. Nevertheless, we’re still looking for a near-term reversal as the relative strength index comes off of resistance (76), but the shift in central bank rhetoric may produce a shallow correction in the USDOLLAR as the RSI maintains the upward trend dating back to September.

Two of the four components weakened against the greenback, led by a 0.45 percent decline in the Euro, while the Japanese Yen shed 0.15 percent as Prime Minister Shinzo Abe nominated nominates Asian Development Bank President Haruhiko Kuroda to head the Bank of Japan. Indeed, there’s growing speculation that the new central bank head will implement more non-standard measures to achieve the 2% target for inflation, and low-yielding currency remains poised to face additional headwinds throughout 2013 as the BoJ continues to embark on its easing cycle. In turn, the deviation in the policy outlook should push the USDJPY higher over the near to medium-term, and we may see the low-yielding currency continue to lose ground over the next 24-hours of trading as the economic docket continues to highlight negative price growth in the Japanese economy.