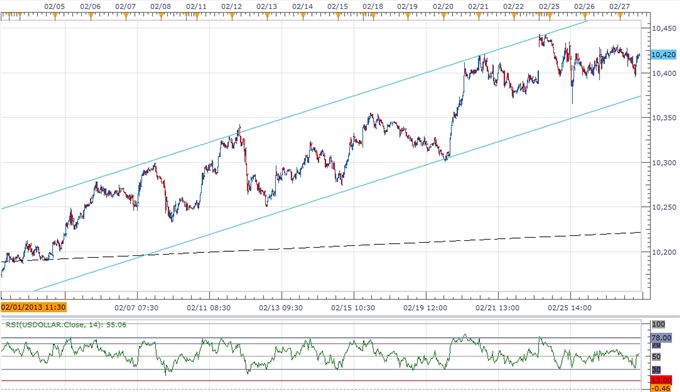 Although the Dow Jones-FXCM U.S. Dollar Index (Ticker: USDollar) remains 0.02 percent lower from the open, the greenback looks poised for a short-term rebound as the 30-minute relative strength comes up against oversold territory. At the same time, we saw U.S. Pending Home Sales jump 4.5% in January amid forecasts for a 1.9% print, and the budding recovery in the housing market should heighten the bullish sentiment surrounding the dollar as it raises the outlook for growth. As the upward trending channel in the USDOLLAR continues to take shape, our game plan is to buy dips in the index, and the reserve currency may track higher going into March amid the more broad-based recovery in the world’s largest economy. 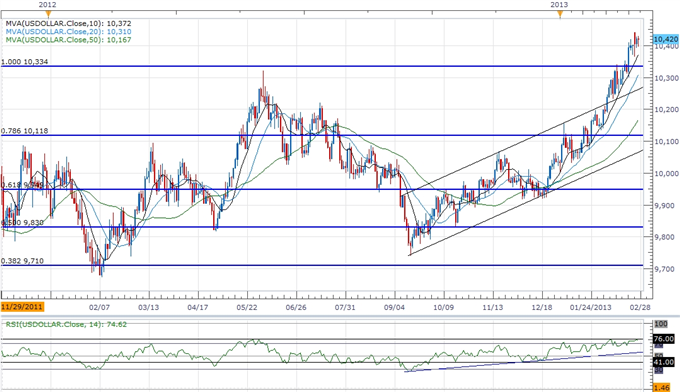 Although Fed Chairman Ben Bernanke argued that the benefits of quantitative easing outweighs the costs, the central bank head held an improved outlook for the region amid the resilience in private sector consumption along with the rebound in housing. Indeed, the chairman warned that interest rates will rise over time as the economy gets on a more sustainable path, and we may see a growing number of Fed officials start to discuss a tentative exit strategy over the coming month as Mr. Bernanke states that the central bank has the ‘tools necessary to tighten monetary policy when the time comes to do so.’ As the U.S. recovery gradually gathers pace, we should see the FOMC adopt a more neutral to hawkish tone for monetary policy, and the shift in central bank rhetoric should prop up the dollar as the FOMC scales back its willingness to expand the balance sheet further. Nevertheless, we’re still looking for a near-term correction as the relative strength index comes up against interim resistance (76), but we will continue to buy dips in the dollar as the bullish trend continues to take shape.

The greenback weakened against three of the four components, led by a 0.30 percent advance in the Euro, while the Australian dollar bucked the trend and shed 0.32 percent from the open. As the AUDUSD struggles to hold above the 50.0 percent Fibonacci retracement from the 2011 high to low around 1.0230, we should see the pair continue to give back the rebound from the previous year, and we are looking for a move back towards the 38.2 percent Fib around 1.0030 as the Reserve Bank of Australia (RBA) is expected to adopt a more dovish tone for monetary policy. According to Credit Suisse overnight index swaps, market participants now see 50bp worth of rate cuts over the next 12-months amid the slowing recovery in the $1T economy, and the AUDUSD remains at risk for further losses as interest rate expectations deteriorate.