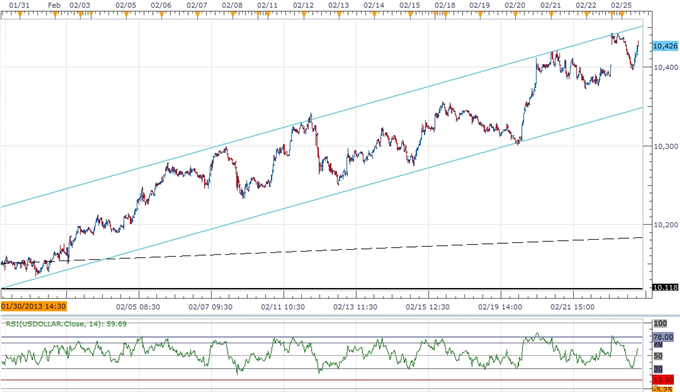 The Dow Jones-FXCM U.S. Dollar Index (Ticker: USDollar) is 0.23 percent higher from the open after moving 94 percent of its average true range, and the reserve currency may push higher over the next 24-hours of trading as the 30-minute relative strength index bounces off of oversold territory. As the index fills in the gap from the Sunday open, the fresh batch of comments from Atlanta Fed President Dennis Lockhart, the sole dissenter on the 2012 FOMC, may heighten the bullish sentiment surrounding the reserve currency, and the USDOLLAR may continue to mark fresh highs ahead of the Fed testimony scheduled for later this week as the upward trending channel from earlier this year continues to take shape. Beyond the Humphrey-Hawkins Testimony, the preliminary 4Q GDP report is expected to reflect a 0.5% rise in the growth rate, and an upward revision may provide another fundamental catalyst to spark a near-term rally in the reserve currency as the FOMC faces limited scope to expand the balance sheet further. 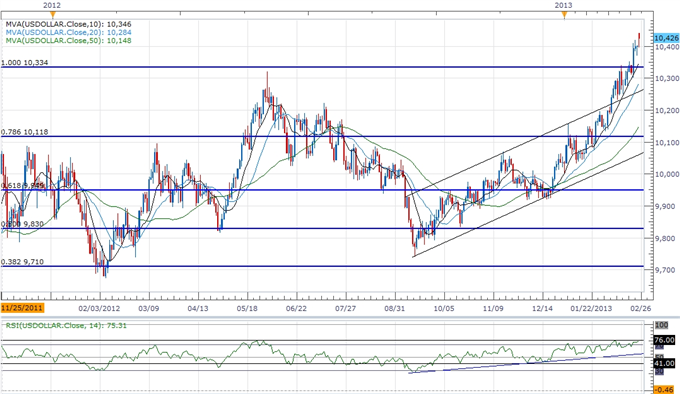 The USDOLLAR looks poised for a near-term reversal as the relative strength index approaches resistance (76), but we may see a shallow correction in the dollar as Fed policy makers adopt an improved outlook for the U.S. economy. Boston Fed President Eric Rosengren, who serves on the FOMC this year, struck a positive tone for the banking sector and said ‘U.S. financial institutions are now well placed to finance the economic recovery,’ and added that ‘the particularly large increase in narrowly defined tangible capital highlights a significant improvement in loss absorption capacity’ as private sector activity gradually gathers pace. As the dollar continues to carve out a series of higher highs paired with higher lows, we will continue to buy dips in the dollar, and we may see another short-term rally in the index should Fed Chairman Ben Bernanke show a greater willingness to start normalizing monetary policy later this year.

Three of the four components weakened against the greenback, led by a 0.40 percent decline in the British Pound, while the Japanese Yen shed 0.37 percent amid growing bets that Prime Minister Shinzo Abe will nominate Haruhiko Kuroda to take the helm of the Bank of Japan (BoJ). As the new government takes a more aggressive approach in tackling deflation, the current head of the Asian Development Bank is expected to unveil new measures to jump-start the ailing economy, and the transition heightens the bearish outlook for the Yen as Japanese policy makers maintain their pledge to weaken the local currency. As the relative strength index on the USDJPY continues to find support around the 60 figure, we will continue to buy dips in the exchange rate, and the pair should continue to retrace the decline from back in 2009 amid the deviation in the policy outlook.