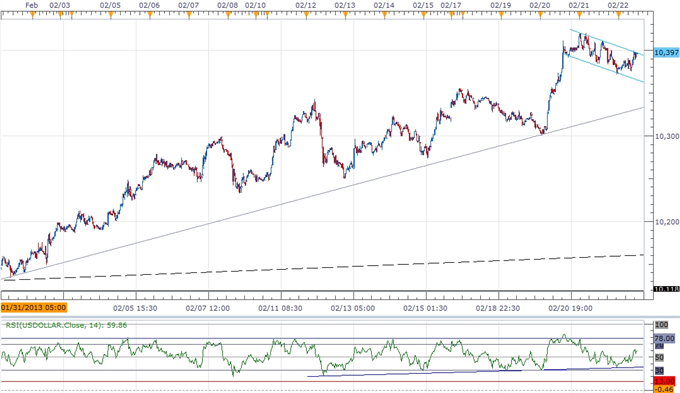 The Dow Jones-FXCM U.S. Dollar Index (Ticker: USDollar) is trading 0.03 percent lower from the open after moving 59 percent of its average true range, and the pullback from the yearly high (10,421) may turn into a larger correction as the greenback struggles to hold above the 10,400 figure. However, as the 30-minute relatives strength index preserves the upward trend from earlier this month, there appears to be a flag formation in the index, and we may see the bullish pattern pan out in the week ahead should we see a growing number of Fed officials strike an improved outlook for the world’s largest economy. In turn, we may see the USDOLLAR set another high during the final days of February, and we will maintain a bullish outlook for the reserve currency as the FOMC appears to be slowly moving away from its easing cycle. 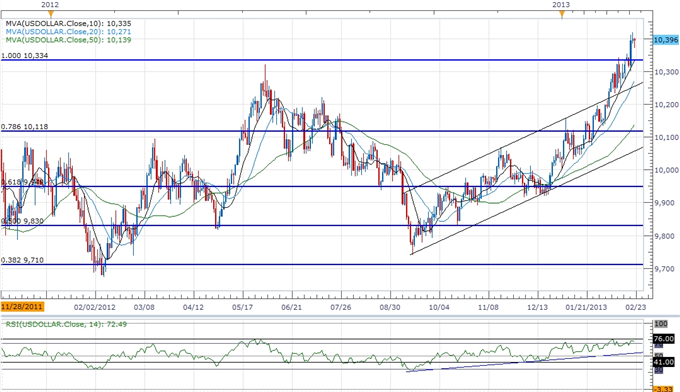 Indeed, St Louis Fed President James Bullard, who serves on the FOMC this year, talked up speculation for a rate hike next year as he expects unemployment to reach the 6.5 percent threshold in June 2014, and went onto say that the central bank ‘may have to alter the pace of purchases’ as the economic recovery gradually gathers pace. Indeed, the Humphrey-Hawkins testimony with Fed Chairman Ben Bernanke highlights the biggest event risk ahead of the automatic spending cuts that will take effect in March, and the fresh batch of central bank rhetoric may further instill a bullish outlook for the reserve currency should Mr. Bernanke endorse a more neutral tone for monetary policy. As the relative strength index continues to trade in overbought territory, we will need to see the oscillator fall back below 70 for a more meaningful correction in the dollar, but we should see the upward trend continue to take shape as the U.S. economy gets on a more sustainable path.

The greenback weakened against two of the four components, led by a 0.61 percent advance in the Australian dollar, but the rebound is likely to be short-lived as the economic docket on tap for the following week is expected to show a slowing recovery in the $1T. Indeed, building activity is expected to expand at a slower pace during the last three-months of 2012, while business spending is projected to increase 1.0% during the same period after expanding 2.8% during the third-quarter. Although Reserve Bank of Australia Governor Glenn Stevens struck a rather neutral tone for monetary policy, but the central bank may have little choice but to push the benchmark interest rate to a fresh record-low as the ongoing strength in the local currency heightens the downside risk for price growth. In turn, our game plan is to sell rallies in the AUDUSD, and we are waiting for a break and a close below the 50.0 percent Fibonacci retracement from the 2011 high to low around 1.0230 to see a more meaningful move to the downside.