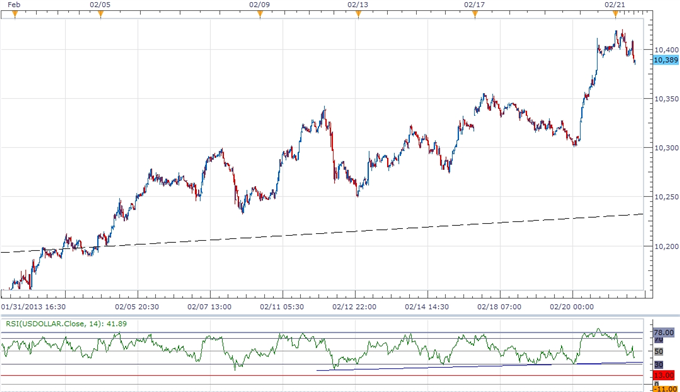 USD Due for Larger Pullback- JPY to Face Shallow Correction

The Dow Jones-FXCM U.S. Dollar Index (Ticker: USDollar) is now trading 0.06 percent lower on the day after moving 74 percent of its average true range, and we may see the greenback continue to consolidate during the North American trade as market participants mull the slew of mixed developments coming out of the U.S. economy. As the 30-minute relative strength index falls back from overbought territory, we may see the oscillator threaten the upward trend from earlier this month, and we may see a larger reversal in the days ahead should the fundamental developments coming out of the U.S. continue to show a slowing recovery. However, as we have FOMC board member James Bullard speaking on monetary policy later today, the central bank hawk may see limited scope to expand the balance sheet further, and the fresh batch of central bank rhetoric may prop up the USD over the remainder of the week as a growing number of Fed officials change their tune for monetary policy. 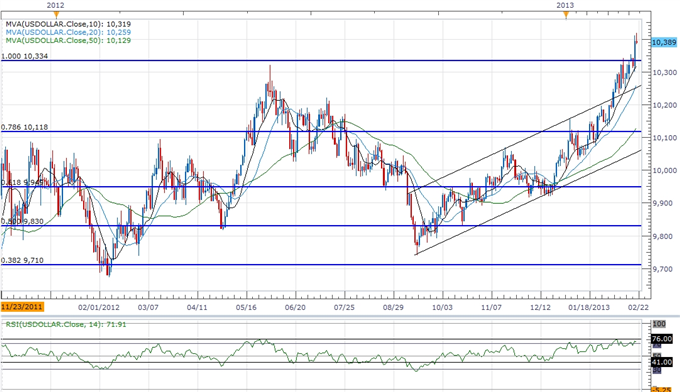 Beyond the Consumer Price report, the budding recovery in the housing market may encourage the FOMC to adopt a more hawkish tone for monetary policy, and the committee may start to discuss a tentative exit strategy in the coming months as the economy gets on a more sustainable path. Indeed, the FOMC Minutes have heightened the bullish sentiment surrounding the USD as the central bank looks to scale back on quantitative easing, and we should see the ascending channel continue to take shape amid the shift in the policy outlook. Nevertheless, as the relative strength index continues to fall back from resistance (76), we should see a more meaningful correction to the downside, but we will maintain our bullish outlook for the reserve currency as the Fed appears to be slowly moving away from its easing cycle.

Two of the four components rallied against the dollar, led by a 0.70 percent rally in the Japanese Yen, but the recent strength in the local currency may be short-lived as Prime Minister Shinzo Abe is expected to announce his nominee to replace Bank of Japan (BoJ) Governor Masaaki Shirakawa next week. Indeed, there’s growing speculation that the next central bank head will take a more aggressive approach in achieving the 2 percent target for inflation, and we should see the BoJ carry its easing cycle into the following year in an effort to encourage a sustainable recovery. In turn, we are still looking for a shallow correction in the USDJPY, and will continue to look for opportunities to buy the pair over the near to medium-term amid the deviation in the policy outlook.