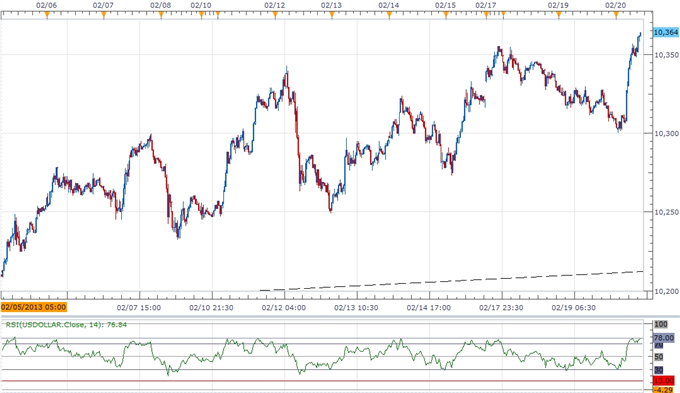 The Dow Jones-FXCM U.S. Dollar Index (Ticker: USDollar) is trading 0.42 percent higher from the open after moving a whopping 134 percent of its average true range, and the FOMC Minutes on tap for later today may prop up the reserve currency over the remainder of the week should the central bank talk down bets for more quantitative easing. However, as the 30-minute relative strength index falls back from resistance (78), the technical outlook certainly foreshadows a short-term pullback in the USDOLLAR, and we may see the greenback consolidate over the coming days if the Fed strikes a more neutral tone this time around. Nevertheless, we will maintain a bullish forecast for the dollar as a growing number of central bank officials drop their dovish tone for monetary policy, and we will continue to look for opportunities to buy dips in the dollar as the bullish trend carried over from the previous year continues to take shape. 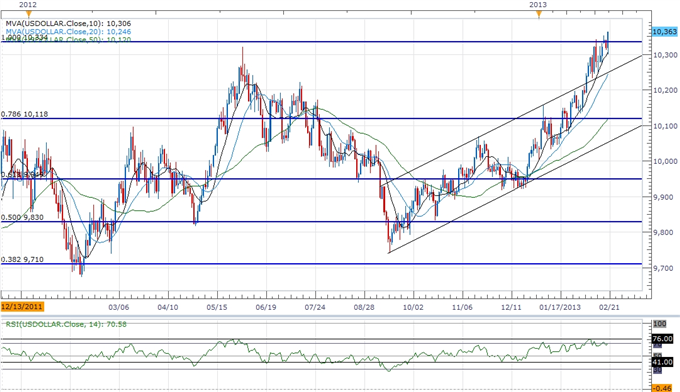 Beyond the U.S. housing data from earlier this morning, the Producer Price Index increased an annualized 1.4% in January following the 1.3% expansion the month prior, and we may see heightening price pressures in 2013 as the economic recovery gradually gathers pace. As the U.S. gets on a more sustainable path, we should see the FOMC slowly move away from its easing cycle, and the pickup in growth and inflation favors a bullish forecast for the dollar as it dampens the central bank’s scope to expand the balance sheet further. Nevertheless, we’re still looking for a short-term correction in the index as the relative strength index continues to come off of resistance (76), but we will look for a good opportunity to buy dips in the dollar as the shift in the policy outlook heightens the appeal of the reserve currency.

The greenback rallied across the board, led by a 0.89 percent decline in the British Pound, while the Australian dollar shed 0.64 percent as market participants scaled back their appetite for risk. Indeed, the aussie remains at risk for further declines as the Reserve Bank of Australia sees scope for further rate cuts, and the ongoing weakness in the $1T economy should produce a more meaningful decline in the AUDUSD as the exchange rate maintains the downward trend dating back to 2011. As the aussie-dollar continues to interim support around the 50.0 percent Fibonacci retracement from the 2011 high to low around 1.0230, we may see the pair continue to track sideways over the near-term, but we will maintain a bearish outlook for the pair as the RBA remains poised to carry out its easing cycle throughout 2013.