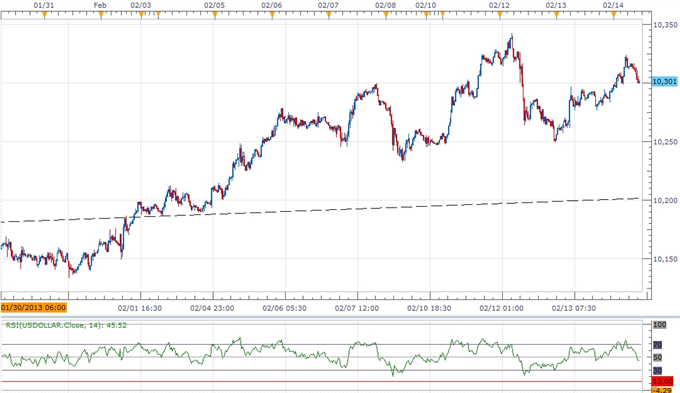 USD Poised to Outperform on Fed Policy, JPY Correction Ahead

The Dow Jones-FXCM U.S. Dollar Index (Ticker: USDollar) gained another 0.26 percent as the deepening recession in Europe increased the appeal of the reserve currency, and the dollar should appreciate further over the near to medium-term as the fundamental developments coming out of the world’s largest economy points to a more broad-based recovery in the U.S. However, we’re getting a bit cautious here as the 30-minute relative strength index falls back from overbought territory, and we may see the pullback from the yearly high (10,343) turn into a larger correction as the index appears to be carving out a head-and-shoulders top on a shorter-term scale. Nevertheless, we will preserve our bullish outlook for the greenback as positive developments coming out of the U.S. economy encourages the Federal Reserve to adopt a more hawkish tone for monetary policy, and we should see the central bank slowly move away from its easing cycle this year as the outlook for growth and inflation picks up. 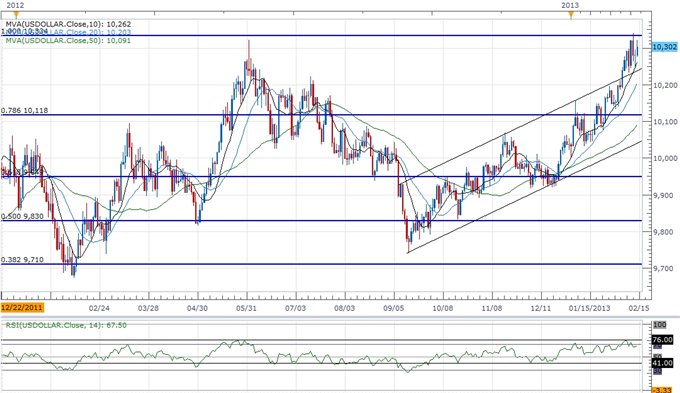 Although we still have FOMC board members James Bullard and Sandra Pianalto scheduled to speak over the next 24-hours of trading, we may see market volatility taper off going into the G20 meeting in Moscow as the group of finance ministers and central bank governors pledge to refrain from competitive devotion. Indeed, the G20 said they’re committed to reducing global imbalances as the world economy remains fragile, and went onto say that the group would be ‘mindful of possible monetary policy spillover’ as central banks across the global continue to embark on their easing cycle. However, as the FOMC scales back its willingness to expand the balance sheet further, the deviation in the policy outlook should prop up the dollar going forward, and we should see the upward trend continue to take shape in 2013 as we anticipate the Fed to start discussing a tentative exit strategy later this year.

Three of the four components weakened against the greenback, led by a 0.87 percent decline in the Euro, while the Japanese Yen bucked the trend and rallied 0.40 percent against its U.S. counterpart as the Bank of Japan (BoJ) maintained its current policy this month. Although the BoJ pledged to do more to quickly achieve the 1 percent target for inflation, the central bank may stick to the sidelines for the time being as the world’s third largest economy appears to have stopped weakening. However, as Governor Masaaki Shirakawa is set to leave the helm in March, we may see the new government continue to threaten the central bank’s independence, and the Japanese Yen remains poised to face additional headwinds over the course of the year amid the push to stem the risk for deflation. Nevertheless, the short-term pullback in the USDJPY should turn into a larger correction once the relative strength index breaks support (60), but we will preserve our bearish outlook for the Yen as the BoJ maintains a highly dovish tone for monetary policy.